Surprise carriage ride turns in to, well, a surprise 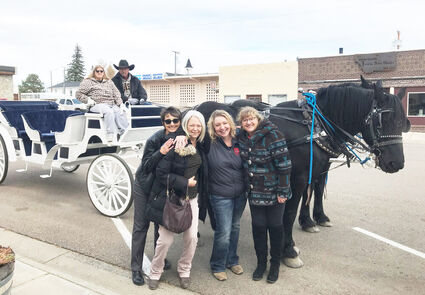 District Court Clerks from the eastern part of Montana pose in front of a horse drawn carriage owned by Dennis and Tami Mitchell. Dennis and Dariane Rose, the Mitchell's daughter, look out from the driver's seat of the carriage. Clerks in Chinook for a district meeting pose in front of the carriage. Shown are (l-r): Tami Christofferson, Shelley Bryan, Jeri Toavs, and Tami Sue Mitchell. Not shown are Tammi Fladager, who had to leave the meeting early, and Kirsten Kelm who participated via Zoom.

Tami Mitchell, Blaine County's Clerk of District Court, hosted a meeting of other District Court Clerks from around District 6-a geographic area that includes district courts from here east to the North Dakota state line. Mitchell said she was excited to host the group because "we usually meet at Glasgow, or some other place more in the center of the district." She wanted to make the get together special for the visiting clerks.

Tami and her husband Dennis secretly planned to pick the ladies up at the courthouse in the horse drawn carriage the Mitchells bought a couple of years ago. The plan was to have the carriage arrive just in time to pick up the clerks and take them to The Grill for lunch, then down Indiana Street to the Wildlife Museum and back to the courthouse to conclude their meeting.

When Tami looked out the courthouse window, just before the planned time for the pickup, she was shocked. She said, "I saw the carriage, Dennis was standing on the ground by the carriage, our daughter Dariane Rose was seated in the driver's seat...but there were no horses. Bob and Betty (the Percheron team) were gone!"

Later Dennis Mitchell explained what happened. "I was pulling up to the curb in front of the courthouse. Somehow Bob stumbled on the curb and either he or Betty stepped on the carriage tongue and broke it." Tami added, "That never happens."

Long story short, Dennis called John Elliot. John came, took the tongue to his shop and, per Dennis, had the whole thing fixed and back on the carriage in an hour. Unfortunately, that hour fell right in the middle of the planned trip to lunch, a ride to the museum and a tour back to the courthouse. Tami added, "Well, at least I got to drive the carriage back to the house after the meeting was over."

The district court clerks completed their business and headed back east to their respective counties. They were planning their annual convention to be held in Glasgow in 2023. Hopefully all the surprises are behind them and the convention will happen with no surprises and 'without a hitch.' And, yes, 'pun' intended.