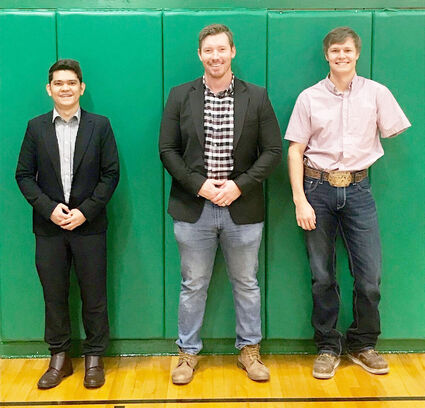 When the 2021-2022 school year began on Turner's first day of instruction back on August 23, students met three new teachers. With one quarter of school now in the record books, Mr. Xerxes Budomo, Mr. Travis Garrett, and Mr. Nathan Urie are adjusting to life as rural educators.

From the Phillipines, Mr. Budomo said that he was inspired to teach in Turner because it has always been his driving force to pursue this dream-the desire to teach in the USA.

"It has not been an easy road, but Turner, Montana, is giving me the opportunity to finally fulfill that goal. This experience will give me the avenue to learn from the education system that I can in return share back in the Philippines soon," Budomo reported.

Having earned all of his degrees in the Philippines, including a recently acquired doctoral degree in Business Administration, Budomo comes to Turner with approximately six years of teaching experience, both at the high school and college levels.

When asked to describe the challenges and rewards of teaching in a small, rural school, Budomo replied: "Coming from a country where English is not the mother tongue, I can say that verbal communication is something I have been most challenged with. What I can consider, so far, as the most rewarding is the good relationship I am building with all the students, staff, and community people here in Turner."

Budomo went on to identify a lesson that he taught to his students that had a particularly favorable outcome. With a lesson in Finance about the budgeting process, the students grasped the importance of handling finances and being aware of budgeting essentials.

When he's not teaching business courses, Budomo enjoys playing with his two sons, learning new skills, and watching movies. His eldest son is three years old and the second is newly born and only two weeks old. "We love science fiction movies, drama-thrillers, or anything that has a captivating and interesting story line," Budomo stated.

Joining the junior high/high school as the 7-12 social studies teacher and the district as the K-12 Physical Education instructor, Mr. Garrett is originally from Katy, Texas, which is approximately thirty minutes west of Houston on Interstate 10.

Garrett was inspired to travel to teach in Montana after spending the last fourteen years in southern California. "I was ready to get out of the big city for somewhere quieter. My family and I absolutely love it here," he stated.

Although this is his first year of public school teaching after spending the last year doing his student teaching outside of Los Angeles, Garrett isn't new to instruction. He has teaching experience gained while enlisted in the United States Marine Corps. Throughout his eight years on active duty, he held multiple instructor billets from teaching shooters before they qualified on the rifle range to the Marine Corps Martial Arts Program to just teaching junior Marines the basic duties of infantrymen.

Garrett completed his schooling at the University of California in Riverside where he initially earned a Bachelor of Arts Degree in History and followed that with a master's degree in education.

About his current position, Garrett commented: "The most challenging part of working in a rural school is the number of hats we sometimes have to wear. It can get to be pretty challenging prioritizing everything. However, that happens to be the most rewarding aspect of the position, as well. Getting to be a role model for a variety of students from kindergarten to seniors is a constant reminder of why I entered this profession in the first place. I have a passion for history and quite a bit of experience teaching in various roles from the military to academics from my time student teaching. This job is an intersection of my passion and my experience, and so far it has been great."

In addition to U.S. History, Garrett teaches U.S. Government to seniors. In a recent lesson on the U.S. Constitution and the founding of this country, Garrett saw students grasping the concepts behind those founding principles, "As they are going through their last year of high school and preparing to head out into the world,

I believe it important that they understand what is expected of them as participating citizens socially, politically, and economically," Garrett observed.

When he is not teaching, Garrett enjoys spending time with his family. He has a six-year-old son and a 34-week pregnant wife. "We enjoy outdoor activities such as camping and hiking. I enjoy staying active and using the weight room at school. I have come to learn that basketball is king on the Hi-Line, so I have begun practicing that too so that I can play pick-up games with other members of the community."

The third new faculty member, Mr. Urie is serving as the agricultural-education teacher. Originally from Ferron, Utah, and recently married, Urie is a graduate of Utah State University where he earned his Bachelor of Science Degree in Agriculture Education. This is his first year as a full-time educator.

"I was inspired to apply at Turner because it was a rare opportunity to move to Montana and work very close to my wife, who teaches in Harlem. We were also drawn to the small, friendly community," Urie said. His wife Kylie teaches Agriculture Education at Harlem Junior/Senior High School.

According to Urie, the most rewarding thing about teaching this first quarter has been the immense community support for an evolving program. The most challenging aspect has been reviving a program that has not been operational for almost ten years.

During his leisure time, Urie enjoys rodeoing, hunting, working on trucks, and snowboarding.

Turner School District Superintendent Tony Warren called the district fortunate to add three new talented staff members to their team. "We are very excited to have these individuals and their families in Turner," he added.