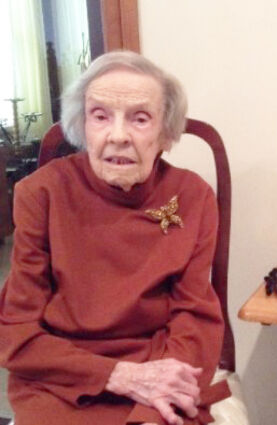 Gen was born November 6, 1918, to John and Emma Hansen in Egeland, ND and moved to Montana when she was six years old. She was third in a family of seven children - Robert, Lucille Reihl, John J, Dona Mae Hanson, Billy D, and Emma Gene Gross.

Genevieve was raised in Havre, MT, attended school there, and worked at the Deaconess Hospital. She married LeRoy Paulson, of Chinook, on December 27, 1936, and moved to Chinook from Havre in 1946. Together they raised four children- Rogene Bouley (Robert) of Billings, Marilyne Berger (Don) of Chinook, Dennis, and Charlene Lewis (Jim) of Arvada, CO.

Genevieve was a lifelong member of the Assembly of God Church. Her life centered around her faith and family. She enjoyed gardening, needlework, her yard, and beautiful flowers. After LeRoy sold Paulson's Hardware and retired in 1974, they shared their love of antiques; shopping and buying everything from glass work to automobiles.

She was preceded in death by her husband, LeRoy; son, Dennis; son-in-law, Robert Bouley; and grandsons, Terry and Tim Berger. She is survived by her sister Emma Gene Gross, of Sun City, AZ; three daughters, Rogene, Marilyne, and Charlene; eight grandchildren, twelve great grandchildren, and four great great grandchildren. She remained in her home in Chinook up until the last nine days.