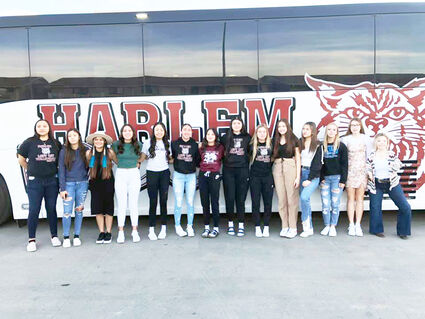 The Harlem Lady Cat Volleyball team as they headed to the Northern B Divisional in Glasgow this past Thursday. Unfortunately the Lady Cats saw their season end after two matches. The girls were a united team all season long and while they may not have always been victorious on the scoreboard they were winners as a team. Congratulations on a great season.

Tournament time is a great time of year, but it also means the end. The Harlem Lady Cat Volleyball team concluded its 2021 campaign this past weekend in Glasgow at the Northern B Divisional.

The Lady Cats began their tournament by taking on the No. 1 seeded Choteau Bulldogs from the District 1B. The Bulldogs went undefeated through their conference schedule and are considered to be among the states best.

Harlem played every point against the Bulldogs the best they could, but the depth and experience throughout the Choteau lineup was simply too much.

Choteau took the first and second set by...