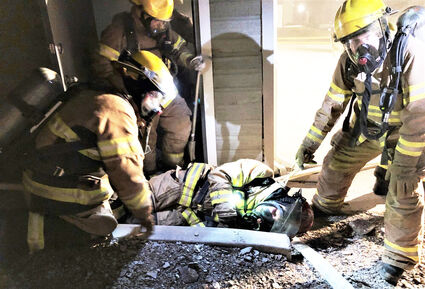 Crossing Indiana Street near the grocery store a few nights ago I looked south and saw emergency flashing lights. From where I was it looked like a fire truck and firemen running toward the tire shop at the end of the block. Curiosity got the best of me and I headed toward the lights and activity.

Turns out Chinook firemen, in full gear and wearing SCBA packs (like scuba gear for firefighters), were moving in and out of the north side door of Chinook Lube Tire and Sporting Goods. Smoke was boiling out of the door and just as I arrived a fireman was assisted out of the building and collapsed on the ground while others aided and dragged him from the fire. And that's when Chinook Fire Chief Kraig Hansen shouted to me, "Hey, Steve, come over here." And that's also when I realized the emergency scene I was watching was a practice exercise. That was a relief.

Later Chief Hansen said he has been in the fire fighting profession for 45 years, about 14 as chief in Chinook and Harlem's chief before that. He explained what I saw was an evolution exercise. "It's a mock fire," he said, "set up as realistic as possible (this case with a machine creating the smoke pouring from out of the tire shop). Sometimes, like tonight, we have access to the inside of the building. Other times, we can only spray the outside." Hansen added the exercise also lets the fire crew become familiar with buildings where they practice and gives them experience dealing with structure fires.

The Chinook volunteer firemen practice once per month, at a minimum, and sometimes do extended weekend practices. This particular exercise also focused on the importance of working as a three-person crew. Hansen said, "Part of the exercise, particularly inside a smoky building which can be very unnerving, is what we call practicing 'crew integrity.' That means the crew leader is always within touching distance of his other two crew members. Even when they leave the burning area they are still together so fire leaders can easily vouch for all the volunteers at the fire.

Part of this exercise was a' Fireman Mayday,' a situation where a crew member falls, is hurt, has a medical issue or for some other reason has to be rescued from a burning area(see photo from exercise). In this case a three-person crew, with a fallen crew member, was being helped by another three-member crew getting the injured fireman to safety. One of the firemen in this exercise was Chris Carpenter who owns the building where he and his fellow volunteers were practicing.

Training is an integral part of being a safe and successful fireman. Hansen explained, "Our department minimum is 30 hours of training each year. In reality, most of our volunteer firemen surpass that minimum, some earning 100-200 hours of training each year. Many also become specialists in certain aspects of firefighting from controlling wildfires to operating and maintaining communication equipment." Part of each monthly training also involves orienting new members as they learn how the department operates and master the skills necessary to be a safe and effective firefighter .