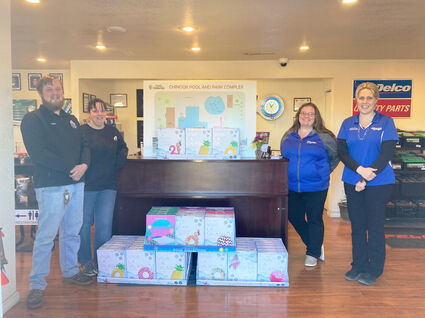 Cody Allen and Hollie Modic of the Harlem Albertson's store stopped by the American Garage in Chinook in late September to drop off a donation of various floatation devices, which were received by Heather Huravitch and Heather DePriest.

The Friends of the Pool and Park Foundation announced in early November not only that donations continue to flow in but that they hope to name the Chinook City Pool the "Jesse Dannels Memorial Pool" once it is completed. That name proposal will be taken to the City Council for approval.

Explaining the planned designation, President of the Friends of the Pool and Park Foundation (FPPF) Heather DePriest said, "I haven't taken this idea to the City Council for approval yet, but we felt that the commemorative gesture was a great fit and voted on it at a Friends' meeting several months back. Eve...