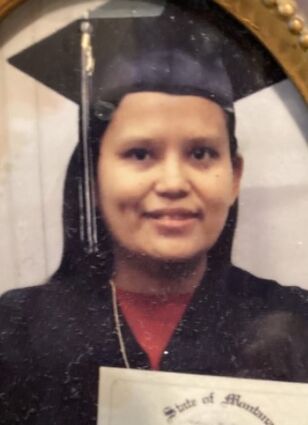 Kristmas Santana Snow was born on December 25, 1982 to Ivy Snow. Kristmas started her final journey on November 10, 2021 surrounded by family. Kristmas passed away from natural causes.

Kristmas attended Harlem Elementary School and the Harlem Jr/Sr High School. She quit high school and in later years she acquired her GED. She was so proud when she received her GED.

Kristmas had various jobs including working at the Holiday Inn in Great Falls, Malta hotel in Malta and she worked for EZ Mart convenience store in Harlem.

Kristmas enjoyed visiting with friends and family, car a--ing around, swimming, and most of all, her children and grandchild and brothers and sisters. She also enjoyed holidays. She was most proud of her children, especially when they made many accomplishments and when they joined sports. She enjoyed taking pictures on her cell phone and posting them on facebook.

Kristmas had a tough, hard battle, but always had a good outlook on life. She never quit or gave up. She will surely be missed by all.

You are free, fly high.