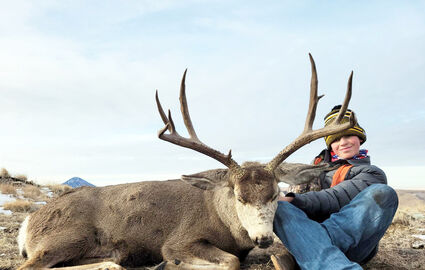 Chinook eighth grader Griffen Crowley had one amazing hunting season this fall. This is Griffen's fourth year hunting, but the first that he harvested multiple species. Griffen harvested a nice Mule Buck as well as a Cow Elk and an Antelope. His hunts occur in the Bear Paws and he is accompanied by his Dad Clint and Cousin Merle Young.

This week we feature a single youth hunter, Griffen Crowley. Griffen is an eighth grade student at Chinook Junior High School and an avid outdoorsman.

Griffen just wrapped up his fourth season hunting and boy was it a good one. Joining him on his hunts are his Dad Clint and his Cousin Merle Young.

All of his hunts occur south of Chinook in the Bear Paw Mountains where he has spent plenty of time surveying the land. This year Clint took him on his Mule Deer Hunt while Merle accompanied him on his Antelope and Cow Elk hunts.

His success this year included harvesting a nice Mule Deer Buck, and...