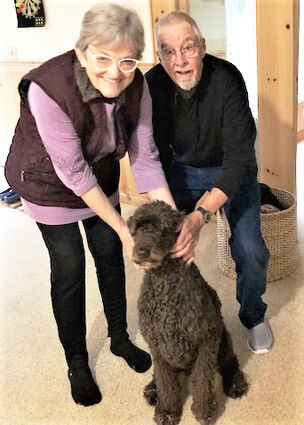 Among the ladies serving pie and coffee at the American Lutheran Church on Sunday, November 21, was Mildred Dawson. She wraps a pumpkin pie in aluminum foil for a transport home.

My wife, Sherry, and I are completing our fifth week as dog sitters in an upscale suburb of Seattle. How we ended up taking on this unusual task is a story itself. And what we learned about the enormity of the pet sitting sector is, well, a bit amazing. Here's how we ended up in Woodinville, Washington dog/house sitting and some of what we learned about the economics of pet sitting. Pet sitting's an economic sector estimated to be worth $2.6 billion per year worldwide and growing.

A few years ago our daughter and her family, who live in the Snohomish, Washington area, moved to a different house with no extra bedrooms for visiting guests. After a bad experience with our first try at using an Airbnb (privately owned places that rent space via the internet for overnight stays) while visiting our daughter, we later found a great match for our needs in Woodinville, about a ten minute drive from our daughter's family. The Airbnb is owned by a professional couple with two sons in college. We've stayed in their "mother-in-law's apartment" several times over the past few years. During the pandemic, we called about staying and the owner told us, "There are a lot of regulations in effect out here and I'm not offering the rental at this time."

Last summer he called and said, "I have a deal for you. My wife and I are going to Florida for five weeks around Thanksgiving. We don't want to board our dog for that long. Would you and Sherry be willing to come and stay at the house for free and dog sit?" We didn't really know the dog but we knew the folks and figured it could be an interesting experience and give some time close to the four grandkids still at home and the three older ones who live in the Seattle area. We called back and agreed to be at the Woodinville house on November 1 and stay through early December. That was how we basically "backed in to" being professional dog sitters. We're not "serial pet sitters" yet since this is only our first time.

Getting the right pet sitter is a major consideration

If the reader is a pet owner they likely could list the pro's of having someone come to sit their pet at the house: the pet isn't moving to a new and strange environment (can be stressful to certain animals); the pet has less chance of being exposed to others animals who might be diseased; there will be someone watching the house during the owner's absence and, most important, the sitter's main focus is caring for your pet.

A major deal breaker against having an inhouse pet sitter could be expensive. I looked at a lot of websites (the primary way people find pet sitters) and found the daily rate out here ranges from $40 to $125 per day (there are some that are even more expensive offering "suites," gourmet meals preselected from a menu, spa time, etc.). I estimate an average of about $70 per day for a competent sitter. You can do the math. For the folks we are sitting for that would equate to about $2800 for 40 days of sitting. I must add here, the owners did give us run of the house and it's a beautiful, well-appointed house that backs up to a nature area with plenty of open spaces and places to walk the dog.

Another challenge is finding a sitter. Because so many pet owners now are also tech savvy it's not surprising that a whole host of companies has sprung up offering sitters via websites. These sites, much like those for making a flight or hotel reservation, are interactive with dates to select when a sitter is needed, ranges of rates the pet owner might be willing to pay and any special needs the pet might have-special meds or dietary restrictions. Some dogs, even in their own space don't like strangers...and that could be a challenge.

Most pet sitters' web sites have biographies and photos of the sitters for hire, along with the pay rates. Posted client comments (from owners, not the pets) about one of the top earners ($125 per day) read, "She came to visit our pet in our home before she actually had to report for the job, she asked questions about caring for our pet that we didn't even know to ask" and "she sent regular texts and photos showing our pet enjoying her care and attention." The "best" sitters also seem to have the best customer service.

Alert readers may be asking, "Who can spend days or weeks taking care of someone's pet in the pet owner's house?" Did you think, "Sounds like something a retired person could do" or, "Only the underemployed would have that kind of time." Both answers are correct! Statistics show a disproportionate number of retired people are now moving into pet sitting situations because they have the time. And people in part time jobs are using short pet sitting assignments to earn a few extra bucks.

What's next for the Chinook-based serial pet sitters? 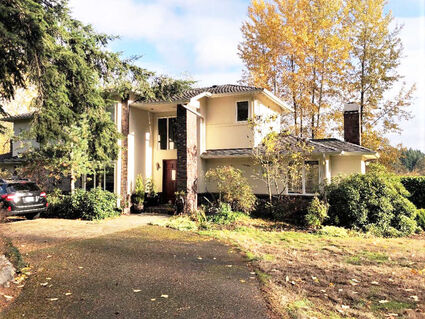 This is the house in Woodinville, Washington where locals Steve and Sherry Edwards are completing their first dog sitting gig. With only one sitting job done, they are not yet 'serial pet sitters' but agreed it was a fun experience.

My wife recently said, "This pet sitting could be a way for us to visit different parts of the country and see our family members that are spread all over." I pointed out to her: we knew this couple that we're sitting for; we knew much of the house and the neighborhood and the pet, an older, standard poodle, is just about the sweetest dog I've ever encountered. She loves people, she loves us. One of her owners warned, "She's clingy" and she is in a good way. What would be the guarantees for such an easy going dog in the future or even a nice place to sit without going there to visit first?

We contacted some friends up on the north side of Seattle to tell them what we were doing in the area. The husband said, "Hey, we wanted to take off for a couple months next winter, could you come and sit our cat?" Hmmm. It's not that I don't like cats, they just don't lend themselves to long walks on a leash or playing catch with a ball. I'd have to really think about that one.

My wife opined, "My sister in Mesa, Arizona might like to take off a few weeks and we could sit her dog." I was thinking, "If the sister is smart she'll want to take off from Arizona in July...not a great time for us to visit. I think before we offer ourselves as serial pet sitters we had better think about the ramifications a bit more.