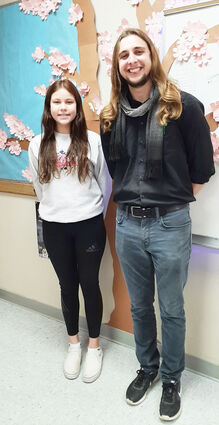 The first author published under the PRE Press label is Mylah Rider, pictured with Matthew Hodgson.

A creative writing teacher in the Lodge Grass School District for many years, Mick Fedullo was a writer and poet who continues to influence Native American youth across the western United States. In his poetry collection Light of the Feather: Pathways through Contemporary Indian America, he chronicles his experiences from reservations in Arizona to the Crow reservation in Montana. Another person largely influenced by the work of this author and educator, Matthew Hodgson attributes Fedullo for inspiring him. In 2020, having recently completed a Master of Humanities in English Literature degree from the University of Chicago, Hodgson set out to write a curriculum centered on poetry reading and writing for his students at Harlem Junior/Senior High School (HHS).

As he worked with his students, Hodgson encountered many who wanted to take the extra step and publish a book of their own work. Not wanting to say no to them, he began trying to determine how he could publish their work privately; that is, to self-publish their books of poetry. From that desire, Pretty Blue Eyes Press, sometimes shortened to PBE Press, was born. However, the name didn't come until later.

In fact, the publishing press' name literally came to Hodgson while he was sitting in his classroom one afternoon and a student wandered in to vent about how horrible her day was going. "As she told me about all this drama in her life, I tried to help by listening to her talk. When she finished explaining, she said to me, 'If you had an Indian name, it would be Pretty-Blue-Eyes.' And then she left. I imagine that she meant a traditional Native American name, or perhaps she was just being funny, but I liked how it sounded and that afternoon I named the press."

PBE Press, which Hodgson started in February of 2021, is a private publisher under Barnes & Noble Press. Its mission is to support student voice and to foster creativity. The first book published under the press label was Mylah Rider's poetry collection, unspoken.

"I first met the class of 2023 in 2017 while substitute teaching and telling students about Sylvia Plath. Since then, many of them have expressed interest in publication. Their efforts with compiling and editing their work, as well as the emotional turmoil of writing poetry so close to the heart, pushed me to establish the press. Their voices could not remain unheard, and it is no accident that the first book published under the press is titled unspoken," Hodgson stated.

After publishing unspoken, Hodgson began working on a number of other student poetry book projects, including one with Jessica King, who later published Bloom.

"Now students have a platform to express themselves in a helpful and creative way. They can comment on the state of the world, themselves, their lives and sufferings through poetry and art, which I believe is necessary despite how undervalued it sometimes seems."

Before PBE Press was founded, Hodgson edited a collection of student poetry that was written in his sophomore and senior English courses. This collection was bound under the title, One Hundred Things I Took the Wrong Way, borrowing a line from HHS graduate Trenton Main.

Since the beginning of this school year, Hodgson has been working on several more book projects, including a longer poetry collection with sophomore Caly Adams under the title Everything Is Livable; a second book with current junior Mylah Rider, tentatively titled beautiful witness; one with Nellie King, which will feature bilingual poems in English and Nakoda; and a collaborative project with sophomores Desiree Smith and Emjai Stiffarm, presently titled A Home in You. PBE anticipates these publications for the spring of 2022. Two more students, senior Vanise Little and sophomore Tova Anderson recently signed on to work on books of their own, as well.

A few of these will be published next year by some of Hodgson's colleagues from the University of Chicago.

According to Hodgson, the press is not regionally specific, nor is it confined to just one form of poetry. Rather, it is open to any poetic style or form that interests people, regardless of their walk of life. Currently, most of the authors who publish with PBE Press are students. Hodgson prefers to center the press on student voices with occasional publications that invite new ways of listening and hearing what others have to say.

"The writing always trends toward the stylistically unique and the experimental. I tell my students that the finest writing is always trial and error. The further someone can push the imagination and the basic rules of communication, the more interesting the writing. The press aims for innovation and free-thinking expressions of selfhood and otherness."

As with any business, Hodgson has experienced challenges. The most obvious of these is time management. "Asking a young person to devote hours of time to editing and writing poetry rarely goes over too well. They sometimes lose track of the final product, but it is hugely rewarding when the books arrive in the mail."

Other rewards include an increased interest in poetry. "More and more, students I never knew were interested in poetry appear from out of nowhere and ask me to help them. It is rewarding to see them care about poetry and what they put out into the world as an expression or extension of themselves. A few students can testify to the fact that I sometimes lose words for how proud I am of their progress and artistic development," Hodgson explained.

As long as he remains teaching at HHS, Hodgson will seek out and attempt to persuade talented youth to publish with PBE Press. "I hope I can continue to find the ones that would otherwise remain quiet or who believe their work unmeaningful. All poetry is meaningful, in my view, and it is merely a matter of persuading the kids that their words are important and possess incredible power.

Of course, I employ an endless number of tricks to find out who writes well on instinct. I assign poems in class and sift through the work to find exceptional effort and concentration." 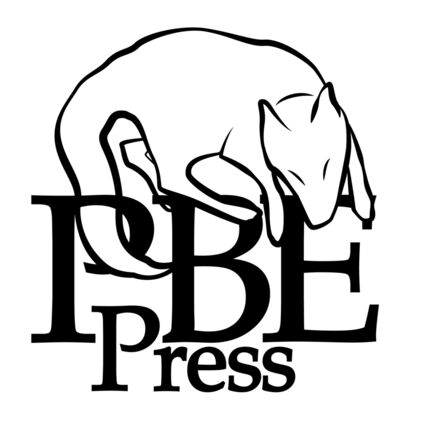 In collaboration with Matthew Hodgson, the logo for Pretty Blue Eyes Press was designed by Blake Downs at Downs Digital Media.

When asked what advice or tidbit of wisdom about making art he would like to share with others, Hodgson responded: "The creation of art has everything to do with self-discipline. I do not believe that creating art has anything to do with short-lived moments of inspiration, as many people have come to believe. True art involves concentration and dedication. It is never the 'inspired' students who finish collections; it is those who stick with the project until it finishes itself. I also think that helping students publish their own poetry books is a wonderful way of making them feel heard."

Like his mentor Fedullo, Hodgson plants ideas and offers structure but allows the greatness that's already inside his students to emerge. "There is a great deal of talent at Harlem Junior/Senior High School, and I spend most of my time convincing the students to explore these rare gifts with poetry or other art forms."