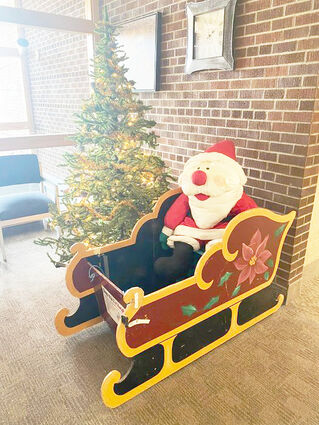 On December 1, Santa parked his sleigh inside the front doors of Meadowlark Elementary School on New York Street in Chinook. This action indicates that Santa's sleigh is ready to start taking donations for the food pantry. With donations to be picked up Thursday, December 16 after school, the class that brings in the most items will earn a root beer float party.

Last year's Fill the Sleigh competition brought in over 300 non-perishable food items for Angel Tree families. The class that won the ice cream and bragging rights with 140 items was Miss Shandel Fouts' fourth graders. Only time will tell whether they will win as fifth graders or if some other class will steal their crown.

According to third grade teacher Mrs. Amanda Davies, her class is hoping to win since they represent the largest group this year. Their rationale is that more contributors will equal more food donations.

With their involvement in activities like these, area youth serve as elves in children's clothing and grow the holiday spirit.