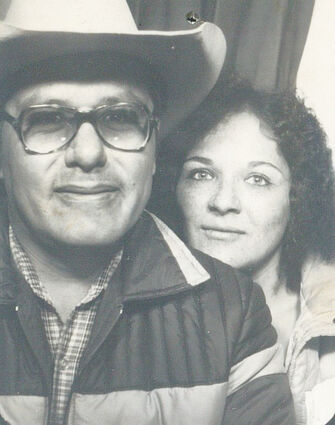 Bernard George Bell, Sr. a descendant of Little Chief patriarch clan Bone Chipper and matriarch clan People Of the North passed peacefully to the other side on November 26, 2021, he left behind his beloved home in LodgePole. He was born November 6, 1952, in Fort Belknap, to George and Mae (Chopwood) Bell. He grew up in a humble home and raised traditional family values. He graduated from the Chilocco Indian School in Oklahoma in 1971. He was a life-long resident of LodgePole. He married Judy Pitkanen, whose union blessed him with the pride of his life- his sons Brian and Bernard George Bell, Jr. He left his home place to travel to the place of peace and beauty. He leaves behind many family members from the oldest to the youngest Minerva Allen, Alpha Stiffarm, Robert Healy, Willis Chopwood, & Larry Crantz. Also children of his father's siblings Preston Bell, Joe Bell, Matt Bell, Hank Bell, Katie Witcher, Ramona Azure, Leona Winn, & Terrance Bell.

Bernard spent his working life serving his community in many facets. He loaned his hands and skills as a laborer, and served as a firefighter. He also spent six years working with SafeFutures, doing his part to ensure a safe and healthy future for the youth of the Fort Belknap Reservation. He settled down for many years, caring for his livestock as a rancher before his retirement. When Doby did anything he took his time talking, doing chores, walking, cooking, etc. the only time he is seen going fast is when he drives on Rte 66 or Hwy 2 even then you will pass him up. He didn't get excited about anything. He was a quite somber guy who did his own kind of hell-raising.

Appreciating the tranquility of nature and his own solitude, he usually maintained his distance socially-though he was known to indulge in a good Western dance! He thoroughly enjoyed the time he spent in the rodeo, both team and calf roping. These talents rewarded him with a scholarship to Northwest College in Powell, Wyoming, where he earned his Associates Degree in Agriculture. There was nothing Bernard cherished more than the time he spent hanging out with his grandkids. They were his pride and joy and he was grateful for the opportunity he had to help care for them.

He was preceded in death by his parents, George and Mae Bell; his brother, Ivan Bell; his sister, Bernelda Bell; his nephew, Ryan Plainfeather; and his niece, Russellyn Plainfeather. Wake service for Bernard will be Monday, November 29, 2021, from 6pm-9pm at Wilderness Funeral Homes, Malta 202 S. 2nd Street. The Funeral Service will be Tuesday, November 30, 2021 at the funeral home, followed by burial at his home.

Covid protocol will be enforced. A drive-through feed will follow the burial. Thank you all for your prayers, help, thoughts, and caring way.