Wildcats Have High Expectations for the 2021-22 Season,drop opener in Cut Bank 61-55 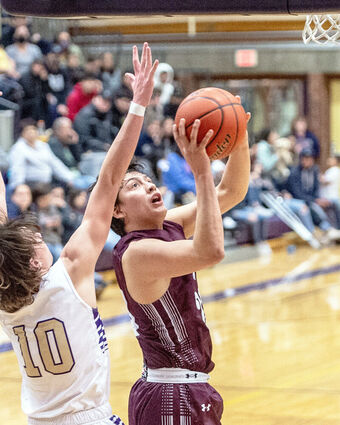 Harlem Wildcat senior Tyler Cichosz scores two of his 14 points in Cut Bank Saturday night in the teams season opener. The Wildcats were missing a number of players, but played hard in a 61-55 loss to the Wolves.

The Harlem Wildcats dropped their season opener in Cut Bank Saturday, falling 61-55 to the Wolves. The Wildcats were shorthanded with a number of players needing practices to become eligible.

Despite the setback in the opener the Wildcats have high hopes for the upcoming season. Harlem will be atop a lot of forecasters list to come out of the Northern B this year and represent the community at the State B tournament in Bozeman. Harlem returns a savvy veteran team that boast a roster built to challenge anyone in the state.

Juniors include Marley Stewart Chantry Jorgenson and Devon Doney. Sophomores are Tommy Champagne, Moses Lawrence and Thunder Bigby. Freshman out this season are Lance Morgan, Christian Beumont and Seth Iron child. Ben Carrywater will return as Assistant Coach for the Wildcats this year as well.

LeValdo expects the game to dictate where his team will get its leadership from, "Leadership on the court, it can be anyone of my seniors, they each contribute different styles, ideas and angles in which the game of basketball has a lot."

Coach LeValdo knows he has an experienced group, but there is more to it, "We consider ourselves a Veteran team who still have things to accomplish this season. My expectations for this year is to make it the most memorable season in which we literally leave everything on the court and have nothing but fun and enjoy the game of competition."

As far as being considered state contenders, it's not even a focus the team looks at. "As far as being looked at as state contenders is cool and everything but literally thats not even a thought right now for us," stated LeValdo. "We are so hungry ourselves on what we need to accomplish this year due mainly to the fact that many of my players have been putting in work since third grade and have been dreaming of this very moment are seniors. This is the last chance of accomplishing their goal."

LeValdo and his team have paid their dues, "Their sophomore year we played Fairfield in a epic game at Divisionals in Malta. We we came up short, two points to punch our ticket to the State Tournament. Last year we missed it by a game in which we placed third in Divisionals in Cut Bank but they only took two teams. My expectations for my younger players is for them to see what kind of work and dedication it takes to be a well accomplished tough relentless unforgiving coachable team and to also absorb the mentality and work ethic it takes to be a step ahead of other competition or even another level," concluded LeValdo.

The Wildcats will be in Billings this week at Lockwood High School to take part in the Class B Tip Off Tournament. The Wildcats will play Lodge Grass Friday night at 7:30 p.m.. Saturday the girls will take on Huntley Project at 4:30 p.m. The Wildcats are expected to be at full strength for both of these contests.

The Wildcats will close out 2021 with three straight home contests. They will host Malta on December 17, Poplar on December 18 and Rocky Boy on December 22.

The District 2B Tournament will take place in Glasgow February 17-19 with the top four teams advancing to the Northern B Divisional in Conrad March 3-5. The top two teams will advance to the State B Boys and Girls Tournament in Bozeman March 10-12.