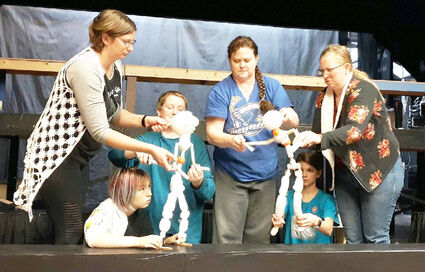 Working with the unfinished Bunraku puppets, Kasie Gandenberger manipulates Scrooge's right arm and head and Jordan Rader positions the feet while Cameron Murri manages the left arm. On the second puppet-Marley, Bonnie Ortner operates the right arm and head while Hailey Gandenberger works the feet and Angela Murri assists on the puppet's left side.

During the first week of December, rehearsals for A Christmas Carol were going strong as cast and crew members began working with the Bunraku puppets that will bring the characters to life. Directed by Angela Pratt, the opening performance of this adaptation of Charles Dickens' classic holiday tale will take place tomorrow, December 16, at 7:00 p.m. in the Montana Actors' Theater (MAT) on Cowan Drive. Five people with Blaine County ties, in fact, have involvement with the production.