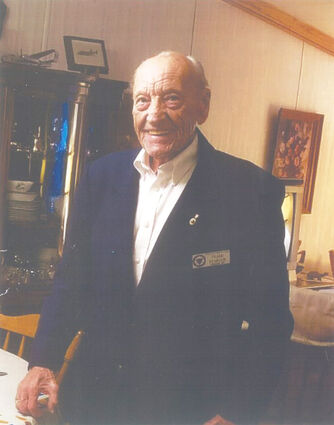 Frank Pehrson passed away December 5, 2021 at Northern Montana Care Center in Havre, MT, at the age of 101.

Frank was born in Wenatchee, WA on October 11, 1920. His parents were John and Elva D Pehrson. He was raised in Alamo, ND. The family relocated to Fort Peck, MT in 1936 and built and operated the Wheeler Hotel. He went to work at Barracks Maintenance at age 16. By age 18, he went to work for Truman Bowen Construction. First as a truck driver and later as an oiler on a crane. At the conclusion of the construction of the Fort Peck Dam, he was sent to Alexandria, VA to work on an ammunition plant, then to the building of the Pentagon building in Washington DC. While in Washington, he met and dated Jane Stewart.

Frank and Jane Stewart were married on February 22, 1945 in Antlers, OK. They moved to Stockton, CA to work for the Stockton Ordinance Depot.

Frank retired in 1995. He and Jane wintered in Arizona, and traveled with the MLDA group. He was an active member of Chinook American Legion Post #48, Chinook VFW, Chinook Masonic Lodge #50, North Central Montana Shrine Club, Havre Elks Lodge #1201, and the Monday Night Choir Boys. He was especially proud of being one of the greatest generation.

Cremation has taken place and services will be held in the spring. Memorials are suggested to the Shriners Hospital for Children, PO Box 2472, Spokane, WA 99210.