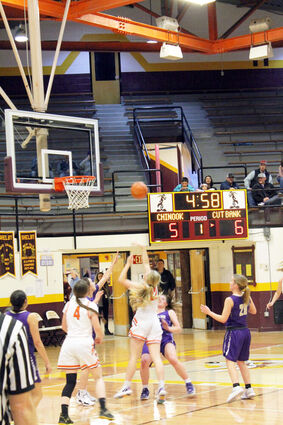 Chinook sophomore Hallie Neibauer gives Chinook an early 8-5 lead against Cut Bank Thursday at the Coyote Preseason Tip Off Tournament in Shelby. Neibauer finished with 25 points in the contest, powering the 'Beeters to a season opening 53-34 win over the Wolves.

The Chinook Sugarbeeter girls basketball team was the last of our Blaine County schools to get their season started. After getting in an extra week of practice before the season opener, the girls were more than ready for their first game action. The 'Beeters headed west on Thursday to take part in the Coyote Classic Preseason Tip-off Tournament in Shelby.

Chinook began their season with a lopsided 53-34 win over the Cut Bank Wolves. Saturday morning the 'Beeters were back on the court with a 9:00 a.m. start to take on the Belt Huskies. Chinook would fall in that contest 43-26 to start their...