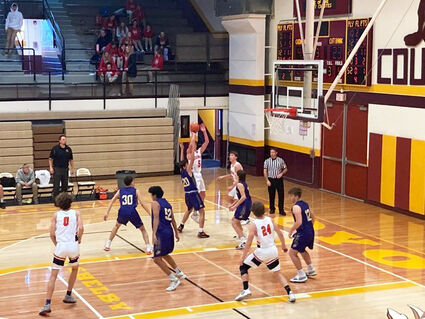 The Chinook Sugarbeeters were the final Blaine County Basketball team to begin their 2021-22 season and they did so this past weekend in Shelby at the Coyote Preseason Tip Off Tournament. The Sugarbeeter boys opened the season with a 55-47 win over the Cut Bank Wolves Thursday afternoon. They returned to the court Saturday morning to challenge the Belt Huskies. After battling back to even the score in the fourth quarter the 'Beeters fell 44-32 to begin the season 1-1.

The 'Beeters scored the opening points of the contest Thursday afternoon on a pair of free throws from junior Levi Jensen. The Wolves answered right back with a bomb from beyond the arc to take a 3-2 lead. Senior Braden Eoff then made a nice cut to the basket for a bucket while being fouled in the process. Following the made free throw and a basket off the inbound pass by senior Oskar Pula the teams were tied at 7-7. From that moment on the Wolves controlled the tempo the remainder of the first quarter taking a 15-8 lead over the 'Beeters.

The second quarter however belonged entirely to Chinook. The Wolves couldn't stop the 'Beeter attack and Chinook quickly found themselves in the double bonus where they made a living at the charity stripe. Junior Brenden Fetter began the quarter with a couple from the line then followed with a nice scoop and score to cut the Wolves lead to 15-12.

Pula added a pair of free throws and senior Hunter Molyneaux added two of his own to give the 'Beeters a 16-15 lead. Fetter kept up the attack with a nice drive to the basket for an easy layup to push the lead to 20-17. Moments later Pula made a steal at half court and coasted to the rim for the easy two handed slam and a 22-17 'Beeter advantage. Chinook closed out the half with a couple of free throws from senior Toby Niederegger and a short jumper from the baseline to take a 30-20 halftime lead.

Chinook kept up the attack in the third quarter, steadily building on the lead to take a 17 point lead into the fourth quarter, 45-28.

The 'Beeter offense went flat to start the fourth quarter as they couldn't get anything to drop for them. The Wolves however kept attacking the 'Beeter defense and slowly began to chip away at the lead. Head Coach Chad Jones called a timeout with 4:20 left in the contest and his team still without a fourth quarter point. Pula got free on the inbound pass and found himself wide open for an easy bucket. Pula was fouled in the process and added the free throw to push the 'Beeter lead to 48-34.

The Wolves wouldn't go away and managed to trim the 'Beeter advantage to single digits late and following a triple by the Wolves the lead stood at 53-45 with 1:00 remaining. Chinook would close out the contest and secure a season opening 55-47 win. Pula finished the contest with a game high 22 points. Niederegger and Fetter each finished with 11.

Saturday the 'Beeters and the Huskies faced off in what was an unusually low scoring defensive minded contest. The 'Beeters would manage just six points in the first quarter and nine in the opening half as the Huskies took a 18-9 lead into intermission. The 'Beeters actually outscored the Huskies 3-2 in the second quarter. 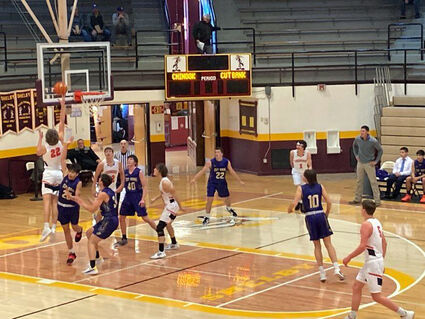 Senior Oskar Pula scores two of his game 22 points in Chinook's season opening 55-47 win over the Cut Bank Wolves. The tournament featured a mix of Class B and Class C teams.

The 'Beeter offense found some rhythm to start the second half. Niederegger connected twice from long range and scored eight points in the stanza Pula added five more powering the 'Beeters to 17 point third quarter outburst.

The Huskies maintained a 32-26 entering the fourth quarter of action, but the 'Beeter offense was clicking. Carrying momentum from the third quarter to start the fourth Chinook battled back to even the score at 32-32. The 'Beeters in their first two contest have seen their offense go dormant for stretches and that was their fate down the stretch. Belt would score 12 unanswered points in claiming a 44-32 win over the Sugarbeeters.

Chinook was led on the night by Niederegger with 17 points while Pula finished with seven. Chinook falls to 1-1 on the young season and will look to bounce back this week. The 'Beeters will be in Big Sandy on Friday to take on the Pioneers and the head to Box Elder Saturday to challenge the Bears as District 9C play gets underway. Chinook will host the Hays/Lodge Pole Thunderbirds in their home opener on Tuesday, December 21.