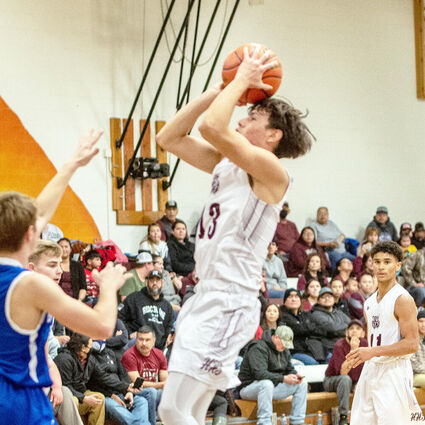 Wildcat senior RJ Ramone scores his 1,001 point of his Harlem career Friday night against the Mustangs. Ramone finished with 19 points in the contest. Saturday he cashed in for 52 in a win over Poplar.

The Harlem Wildcats have had a wild start to the season, battling a number of different issues that have yet to allow them to field their full roster. This past week they were back home playing in front of the home town crowd for the first time.

Friday night the Wildcats welcomed the Malta Mustangs to town in their District 2B opener. The Mustangs left town with a 58-46 win over the Wildcats. Saturday the boys hosted the Poplar Indians and put on a show in a 71-64 conference win.

Friday night the Malta Mustangs visited the Harlem Wildcats in a District 2B opener for both squads.

Field goals were tough to come by early on as both teams challenged each other defensively. Senior Deshon Shambo scored from beyond the arc and senior Tyler Cichosz connected on a pair of field goals in a low scoring 9-9 first quarter.

Harlem kept up the intensity in the second and took a slim 23-22 lead into the halftime locker room. Senior RJ Ramone scored six in the quarter for the Wildcats.

The Mustangs came out firing to start the third and soared to a 41-35 lead entering the fourth quarter. Ramone did his best to keep the Wildcats close, connecting on all five of his free throw attempts and scoring nine points down the stretch.

In the end it was the Malta Mustangs that would pick up the win, 58-46 over the Wildcats. Ramone finished with 19 points on the night and surpassed the 1,000 point mark in the process, joining the exclusive club.

Ramone was just getting started though as the senior was primed to put on a show Saturday evening against the Poplar Indians. Harlem was down two starters entering the contest with Daniel Henry and Tyler Cichosz both nursing injuries.

Ramone led the Wildcats onto the court and wasted little time getting into a highly effective rhythm.

Ramone connected twice from downtown in the opening quarter and scored 12 points. Junior Marley Stewart and sophomore Moses Lawrence added a bucket each to give Harlem an early 16-12 lead.

Ramone was just getting started as the sharpshooting senior continued to find his mark from long range. Ramone began the second with a couple of triples for the Wildcats and then stepped inside the arc for four more field goals scoring 15 in the quarter with a free throw added in. Shambo connected from distance as well and Harlem led 37-32 at the break.

Halftime didn't slow Ramone down one bit. He started out with a dribble drive for two, followed with another trifecta and then scored six more in the frame to help the Wildcats maintain their advantage and take a 53-51 lead into the final eight minutes of action.

Shambo added to his total with four big points down the stretch in a tightly contested game. Neither team wanted to give in to the other, but Ramone was relentless in his effort. 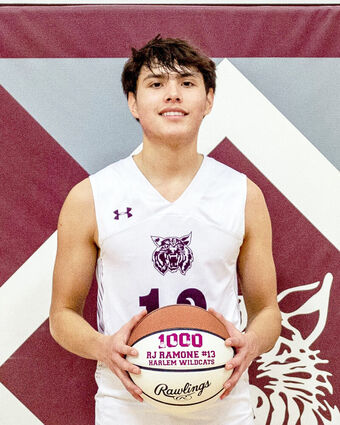 Ramone was presented with a 1,000 point Club Game Ball after his accomplishment Friday.

He began the fourth with a pair of field goals before connecting once again from long range. Poplar extended their defense but Ramone attacked the rim for another couple of baskets before stepping back out and knocking down his seventh three-point bomb of the contest. Ramone tossed in 14 fourth quarter points to help the Wildcats earn a hard fought 71-64 win over the Indians to even their conference record at 1-1.

When all was said and done Ramone tallied 52 points in the win, scoring 15 two point buckets, seven from three point range while also converting his one attempt from the charity stripe. Shambo added eight big points to the Wildcat total while Stewart scored four in the win.

The Wildcats concluded the 2021 portion of their schedule this week against the Rocky Boy Stars, full results will be in next weeks Blaine County Journal. The Wildcats will return to the court on January 7 when they will welcome the Chinook Sugarbeeters to town. The boys will be in Wolf Point the following day.