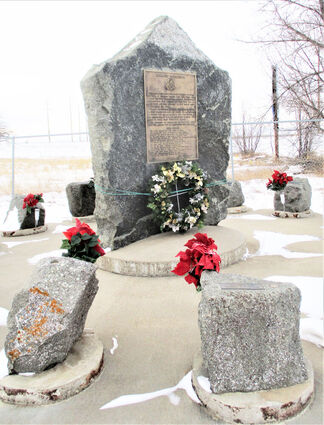 In this recent photo the Airmen's Memorial at Harlem is shown decorated for Christmas. The Memorial was first considered during the operations to recover 13 Air Force crewmembers killed when two cargo transports collided about nine miles north of Harlem in November, 1992. Built by donated labor and materials, the Memorial is decorated for certain days by a committee of local volunteers.

Darwin Zellmer, of Harlem, recently shared a letter from William McKinney, Col. USAF (Ret). McKinney, and his wife, Jill, visited the Airmen's Memorial in Harlem last fall on the way from their home in Florida to Glacier Park. Part of the trip was to fulfill a promise the retired colonel made to his wife to let her see and experience the memorial to the 13 Air Force crew members who died in an air crash north of Harlem.

McKinney was the squadron commander of 11 of the 13 crewmembers killed when two C-141 cargo jets collided and crashed on the night of November 30, 1992 during a training exe...