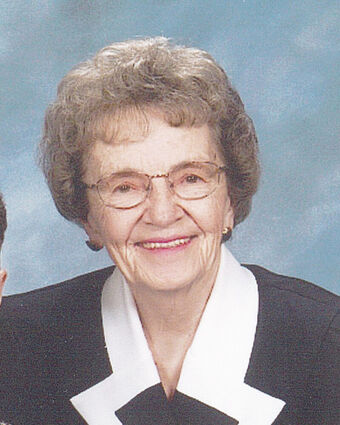 Marietta Mabel (Chapman) Mosser (94) was welcomed into heaven during the early morning hours of December 23, 2021. She passed peacefully at home with her devoted son Doug by her side. Marietta, a blessing to all those who knew her, was a dedicated wife, loving mother, caring grandma, fun-filled sister and aunt, and a friend to so many.

Marietta began her long and happy life on December 8, 1927 in Chinook, MT. The youngest child born to Oris and Mabel Ikemire Chapman, Marietta graduated from Chinook High School in 1946. She worked at Ivey Drug in Chinook during her early years after high school and soon after met Norman Mosser Jr., whom she married on July 17, 1949. They began their family in 1952 by welcoming their first son David Norman Mosser, and the birth of Douglas Michael Mosser in 1955 completed their family of four. Marietta and Norman were happily married for 62 years until Norman's death in 2012.

Throughout her life, Marietta could often be found with her sister Dorothy Obie. They were so close they even had their sons David and Larry on the same day . . . twin cousins! Marietta treasured her flower garden and her yard (especially her geraniums). She also was an avid bridge and card player. Throughout her life, she followed her children's scholastic and athletic activities, and later on her grandchildren's. Marietta, an excellent dancer, frequently graced the dance floor where she and Norman, both dressed impeccably, enjoyed each other's company and being in each other's arms. Marietta loved golf and playing the game with her family. She holds the distinguished honor of being the only one of the Mosser-four to get a hole in one, and she was always ready to tell others about this accomplishment.

Family and friends would describe her as kind-hearted and thoughtful. She was an immaculate housekeeper and an amazing cook who had a strong commitment to her family and her faith. She enjoyed watching Shirley Temple movies, as well as the Oak Ridge Boys and Statler Brothers on TV. Her fun-loving nature shined as she was often seen shimmering her hands to whatever music was playing. Marietta loved to give back scratches. Everyone enjoyed that perfect combination between a tickle and a scratch. She had a way of always making people feel welcome and comfortable, which was evident through the many dinners and gatherings hosted at the Mosser house.

Marietta was preceded in death by her parents, her husband Norman, her son David, her brothers Melvin, Art, and Harold Chapman, and her sisters Freda Miller, Frances Richardson, and Dorothy Obie.

The family would like to acknowledge and thank Ginger Maddox and LuAnn Brabson for their wonderful care and companionship they provided Marietta over the past 13+ years.

Funeral services will be held Thursday, December 30 at 11am at the American Lutheran Church in Chinook, MT with a reception to follow. A graveside burial will be held at Kuper Memorial Cemetery. Funeral arrangements are with the Wilderness Funeral Home of Chinook, MT. Memorials may be sent to the American Lutheran Church in Chinook or the Chinook Golf Course.