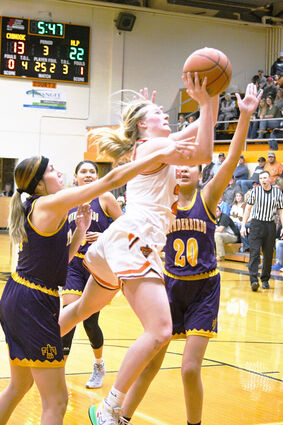 Sophomore Hallie Neibauer poured in a game high 28 points in the 'Beeters 52-43 win over Hays/Lodge Pole.

It was a tale of two halves this past Tuesday night in Chinook as the Sugarbeeters welcomed the Hays/Lodge Pole Thunderbirds to town. Both teams have the same goal of playing on Saturday night at the District 9C Tournament in February, making this early season clash a big one.

The Thunderbirds controlled the tempo early in a defensive first half, taking a 19-10 lead into the halftime locker room. The third quarter belonged to the 'Beeters as they stormed out of the gates, turning a nine point deficit into a nine point advantage heading into the fourth quarter en route to a 52-43 victory.