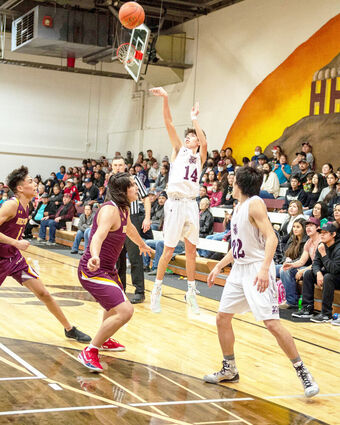 Wildcat senior Teagan LeValdo lets one fly from beyond the arc Wednesday evening against Rocky Boy. LeValdo score 11 points in the non-conference clash with the Stars.

The Harlem Wildcats have had a bumpy start to the 2021-22 season. Injuries have plagued the team since the very beginning allowing the Wildcats to take the court with their full roster just once this season.

The Wildcats have struggled on the court with their regular starting unit in disarray. That doesn't mean they haven't been fun to watch along the way.

Harlem hosted the Rocky Boy Stars in their final contest of 2021 last Wednesday. The Stars were ready to run when they took the court and Harlem was willing to run with them.

The Wildcats lack of depth limited the teams success as Rocky...