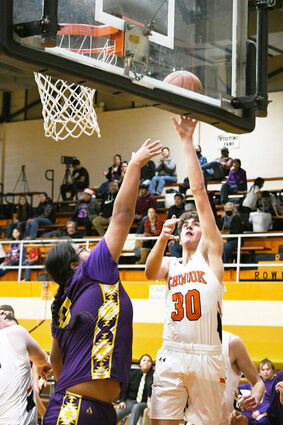 Chinook sophomore Jackson Nordboe scores two of his 10 points in the 'Beeters 62-59 double overtime win over the Thunderbirds.

The Hays/Lodge Pole Thunderbirds were in Chinook this past Tuesday for District 9C contest to close out the 2021 schedule for both teams. The early part of the schedule has left both teams wanting more. Tuesday night they left everything on the court in a double overtime thriller that had fans on the edge of their seats late into the night. At its conclusion it was the Sugarbeeters walking away with an exhausting 62-59 win.

Both teams entered Tuesdays contest feeling a little snake bit to start the season. The Thunderbirds (1-4) and Sugarbeeters (1-3) both suffered a pair of conference loss...