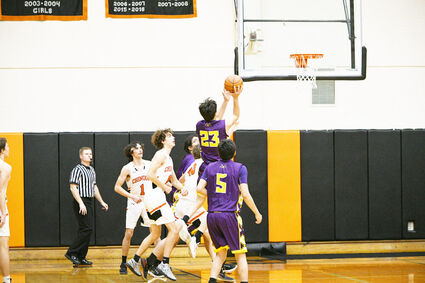 Hays/Lodge Pole senior, TyShawn Shambo has had a big start to the season for the Thunderbirds, leading his team offensively nearly every time out. Shambo scored 25 in Mondays 61-55 overtime loss to the Fort Benton Longhorns.

To suggest that the Hays/Lodge Pole Thunderbirds haven't been competitive this year would be a huge understatement. Counting their overtime contest against the Sugarbeeters on Tuesday, The Thunderbirds have played overtime in nearly half of their games thus far.

Monday in Fort Benton the Thunderbirds left it all on the court, but once again they fell in an overtime heart breaker, falling to the Longhorns 61-55.

The Longhorns appeared to be in control earl on as they controlled the tempo. Hays/Lodge Pole benefited by long three balls from junior Daniel Henry and sophomore RJ Blackcrow early...