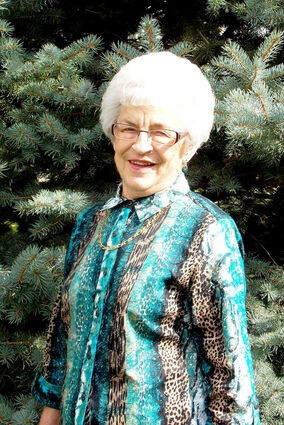 Marilyn B. Herman was a caring wife, mother, grandmother, great-grandmother, sister, and friend. She passed away at home with family at her bedside in Helena, on December 16, 2021 after an extended illness.

Marilyn was born to Adolph and Hilda Beck on September 27, 1938, the middle child of seven. After graduating from Hogeland High School in three years, she was back on the Hi-Line and in the classroom two years later, teaching students who were sometimes older than she was, and definitely bigger.

In 1959, Marilyn married Ray Dudley and together they had two children. After their divorce, she brought her children, Wade and Midge (Madalyn), to Choteau in 1970, where she taught 4th grade. Many of her former students still say she was their favorite teacher. Her fellow teachers set her up with Jerry and they were married soon after. Their daughter, KarenDe, joined the family in 1974. Their love and devotion to each other was obvious to everyone who knew them. Jerry and Marilyn celebrated their 49th wedding anniversary in August 2021.

Marilyn was a shark at pinochle, having learned well at her father's knee, and she passed down his instructions to "walk around the chair" when you needed a change in luck. If you didn't already play pinochle, she was very happy to encourage your learning and then just as happy to lay down 1500 trump against you in the next hand. All the while, nibbling on whatever sweets she happened to have made especially for whomever stopped by to play.

Marilyn spent most of her time outdoors when she was young, preferring to work with her dad in the fields rather than cooking and baking inside with her mom. Somewhere along the way, though, she absorbed her mom's cooking and baking skills and got a reputation as one the best bakers around. As many folks from Choteau would agree after eating her homemade pies that always sold out at the Ice Cream Parlor.

Likely her favorite hobby was gardening. Marilyn had an amazing green thumb, and her vegetable and flower gardens were always Good Housekeeping-worthy. Her beautiful flowers attracted butterflies and birds, as well as rascally rabbits, deer and other furry creatures. And, even though she got mad at the deer for eating her flowers, one of her favorite things was seeing a new mama deer with her twin fawns hidden in the flower bed. She loved to have pictures taken of her grands and great grands sampling the fruits of her garden. If one thought the berries a little too tart, she was quick to pass on the lesson that "sweet is good," with a little sugar on top.

From humming "The Old Rugged Cross" while sewing clothes for her kids, to singing a golden oldie while dancing with a resident of the nursing home where she worked both as a nurses' aide and an activities director, to 30+ years in the Choteau Methodist choir, Marilyn was always singing. And when she wasn't singing, she was passing along family stories, chatting easily with anyone and everyone, and playfully needling her kids and grandkids. She never met a stranger. Losing her voice to emphysema was one of the hardest things for her to deal with in her later years, and even when she was having her hardest days, she so loved to tell her stories that she would continue to talk between coughs, even when her grandson called her "Squeaks".

She was preceded in death by her parents, brothers Irvin and Ronnie, and sister Dorothy, and her first husband Ray Dudley.

A memorial service will be scheduled in Choteau for some time in the early spring. In lieu of sending flowers, please plant some in your garden in her memory, or donate to your local library to honor her love of reading.