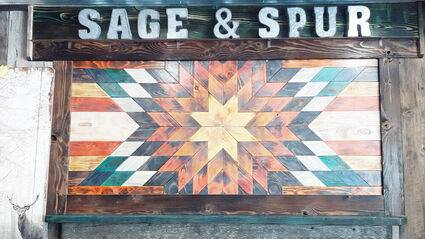 On December 19, Vince and Raegan Bell celebrated the opening day of their new business. Located on Highway 2 just west of Harlem, Sage N Spur Mercantile occupies the previous Hart of the West building.

About their first day of business, Raegan Bell said, "We are so happy about the status of our store and the amazing kind words and support. It could NEVER have been done without the help of our family, friends, and our amazing local towns and loving communities. It took a while to get the place in shape. We appreciate everyone who has helped us grow."

To serve the community, the Bells plan to stock farm and ranch supplies as well as clothing. "We will grow as we go," Raegan stated. For now, they carry everything from cow hide checkerboards to purses, leather wallets, toys, games, professional hair supplies, and rearview mirror charms. They also have such items as animal feed and calf milk replacer, in addition to coffee, teas, gourmet dips, and glassware. Their planned hours of operation will be Monday thru Friday from 9:00 a.m. until 6:00 p.m. Tentative intentions are to add Saturday hours from 10:00 a.m. until 2:00 p.m.

In these early days of operation, the store has faced difficulty in obtaining all the products they wish to stock. Bell attributes those barriers to residual impacts related to the pandemic and to supply chain challenges. During this phase, Bell asks patrons to "please be kind and continue to be patient. The world is harsh enough, so negative words or bs will be shoveled out the door-not gonna happen in my store!"

However, Bell does encourage suggestions. "I have a box available in the check-out area. So, if you have a suggestion for an item you would purchase, please write it down." Merchandise recommendations can also be left by calling 406-945-3900 or 406-353-4367.

While the suggestion may not receive immediate attention-due to potential obstacles like finances, shipping issues, quantity limitations, and availability-Bell vows to make every effort to serve not just the local consumer but everyone who stops in the shop. Shoppers are invited to sample complimentary popcorn while they browse.

Although the Bells purchased the building in approximately 2012 and made plumbing and electrical repairs, the Sage N Spur Mercantile began to really take shape in mid-November of 2021 when crews were in the building installing new flooring, as well as remodeling and decorating. One area of the store is finished with refurbished wood and tin from local farms and ranches. "We are proud to feature the history of our farmers and ranchers in our store," Bell stated. "We cut boards, and people took boards and branded them and brought them back. So we have local brands on the store's walls."

In an effort to carry that frontier theme throughout the mercantile, Bell sent out a request over Facebook on December 9: "We're in search of boots and spurs. We all have worn out boots, or we may have lost one boot when its mate grew legs and walked away. Before you toss that stray boot or spur, send it our way! They will stay here and be used for decoration."

Those in the Sage N Spur were created by Vince, who interacted with the southwest culture while attending the Institute of American Indian Arts in New Mexico. He earned his Associate of Fine Arts Degree in Studio Arts in 1996. To achieve a centuries old look, Vince fashioned the kiva ladders from old teepee poles, which were hand-hewn from natural pine logs. Then, he lashed them with rawhide strips. "I thought they would make a nice display system," Bell said.

In fact, Vince is responsible for many of the artistic features in the store. With the help of family members Shay Snider and Trent Jones, he constructed cupboards, countertops, and display tables. Many of these are finished with colored epoxy, giving them a vibrant, marbled appearance. Random boards and doors have been burned and then stained, imparting a warm and earthy impression. A reproduction of an Indian Chief also decorates one south wall.

Another accent piece is a 47 year old mounted moose head that once belonged to Bell's Uncle Pete Siemens. For several years, the mount, which was harvested on a hunt with Cody Houston in the Bob Marshall Wilderness, hung in Kennedy's Bar on Main Street in Harlem.

It was later removed and stowed in his sister's basement-the home of Penny Snider, Raegan's mother-for many years until it was restored. With Siemens' brand visible between its antlers, the moose now hangs in commemoration at Sage N Spur.

Because the décor includes plenty of antiques, art, and local history, the mercantile has an almost museum or gallery-like quality. "I had a customer in the store that first week who commented that he hadn't seen a certain cattle brand since he was a boy. That people can find those connections here makes my heart proud," Bell said. "It's why we've accepted various pieces to display, like an old clock that belonged to Lorraine Schwenke. Each piece tells a story."

Where there is pleasure, however, there is often pain. Bell describes business ownership as both "scary and nerve-wracking," but amidst the tears and trials, she and her husband are excited to offer this service to the community. 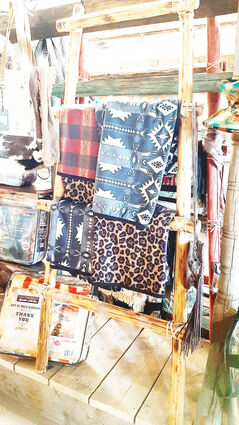 After graduating from Harlem High School in 1994, Raegan attended Dahl's College of Beauty in Great Falls to earn her Cosmetology License in 1995. Upon earning that certification, she lived and worked two jobs in Great Falls for a time before returning to Harlem in 2010. Once home again, Bell operated a tanning and hair salon out of her garage for several years before deciding that she needed an alternate work space. Now, she hires two employees to work the store while she continues to generate an income with her hair dressing business-also located in the south end of the mercantile building beside her tanning bed room.

Although the challenges are abundant, the Bells plan to persevere and to grow their business, not only through the good years but during those that test them, too.