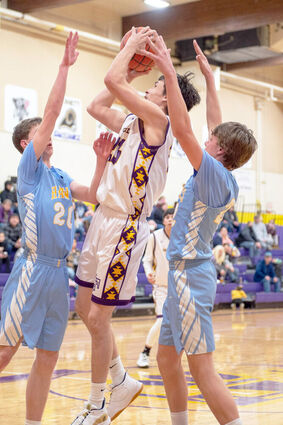 The Hays/Lodge Pole Thunderbirds began the new year with a bang. Friday night they welcomed the Turner Tornadoes to town and picked up their first conference win, 60-49. Saturday the Chester/Joplin-Inverness Hawks visited the Thunderdome. Hays/Lodge Pole was clutch down the stretch in securing a 52-48 win.

The Thunderbirds have played some barn burners this season but were still unable to find the win column, that all changed Friday night. Turner had the hot hand early getting long balls from sophomore Ryan Doyle and sophomore Trent Billmayer. Junior Brandon Castillo had the Thunderbird answer with six points in the opening frame to give the Thunderbirds a 14-10 lead heading into the second.

Freshman Carson Maloney scored eight second quarter points, senior Trevor Kimmel added five and suddenly it was the Tornadoes with the lead 24-22 at the break.

Senior Tyshawn Shambo got the Thunderbirds on track to start the second half, knocking down a pair of three-point bombs in a 16 point Thunderbird third quarter. Junior Daniel Henry added five to help the Thunderbirds to a 38-33 lead heading into the fourth quarter.

Saturday the Thunderbirds were looking to make it two in a row with the Chester/Joplin-Inverness Hawks coming to town. Henry and Has The Eagle each connected from beyond the arc early but the Hawks led 15-10 after one quarter.

The Thunderbirds managed to trim a couple points off the deficit before the break. Castillo scored six to bring the Thunderbirds within three at 23-20.

Henry found his mark from distance coming out of the halftime locker room. Henry drilled a pair of three balls and scored 12 points to lead the Thunderbird comeback. Shambo added six more in a 18 point Thunderbird third quarter. The defense was stingy as well, limiting the visitors to just five points.

The Thunderbirds began the fourth quarter with a 38-28 advantage. The Hawks quickly turned up their attack and began to chip away at the Thunderbird lead. Sophomore Jacoby Ball scored six big points down the stretch and Shambo added four to help the Thunderbirds keep the Hawks at bay and secure a 52-48 win.

The Thunderbirds were led in the contest by Henry with 18 points, including three from long range. Shambo added 12 and Ball six. The Thunderbirds will look to keep the momentum going this week with games against Dodson (Tuesday) and Box Elder on Friday.