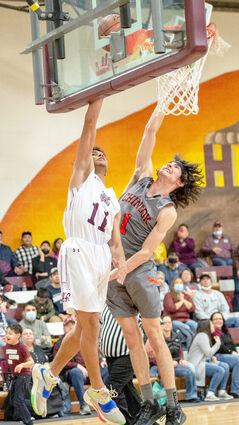 Harlem senior Amari Stanley glides to the basket for a first quarter basket against the Sugarbeeters this past Friday night.

The Harlem Wildcats have battled the injury bug for much of the season and were looking to get a few key players back when they took the court in the new year for the first time. The Chinook Sugarbeeters were in town Friday night for a non-conference clash between two rivals. The Wildcats took control early and then maintained a comfortable cushion in securing a 74-67 win. Saturday Harlem fell just short in suffering a 70-67 road lost to District 2B foe Wolf Point.

Friday night against the Sugarbeeters the Wildcats were looking to set the tone early and they did just that. Senior Teagan LeV...