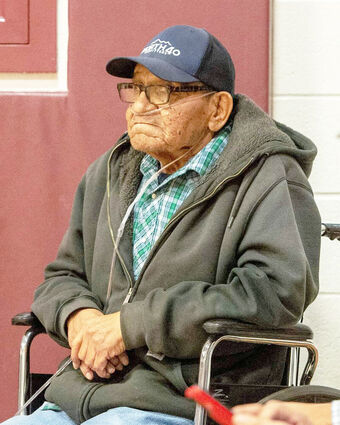 Amos was one of the Flandreau Indian Basketball teams high scoring players. FIS went to the state basketball tournament in Sioux Falls, South Dakota. They came away with 2nd place.

Amos joined the Army and was stationed in California where he met Betty Lou Hawley. To this union they had two precious little boys; Amos III and Gerald Daniel. He moved back to Burns, Oregon after his stint in the Army where he worked various jobs with his brothers-in-law.

Amos moved back to Fort Belknap following his separation. He worked various jobs at Fort Belknap, working for the Tribe Land Department was his favorite place of employment. He enjoyed working with people, and especially loved being outdoors.

Amos loved to go fishing with his children at Strike, Snake Butte, and the Dodson Dam. Cruising the Rez was one of his favorite past-times. He enjoyed driving the backroads to and from Harlem to Havre. He enjoyed ice fishing during the winter months. Amos's love for playing Basketball spilled over into watching games in Chinook, Hays Lodgepole, Dodson, and Harlem. One could always see him sitting on the bottom row of the first set of bleachers at Harlem Gymnasium. He razzed everyone who walked by. He enjoyed going to the casinos up and down the Hi-Line to socialize and to "donate". Branding, moving cows, cutting hay, and baling was enjoyable even though he complained about the starting late and the disorganization of his "Bosses". He loved going to the horse races and rodeos.

You could find Amos flipping through channels between basketball games, football, and rodeo when he decided to take a break from "checking out the valley". The referees caught heck even on the screen.

Amos is preceded in death by his children Amos III, Gerald, and Melvina, his parents Amos and Tiny, paternal grandparents Hank and Alice, and Maternal Grandparents Jesse and Melvina.