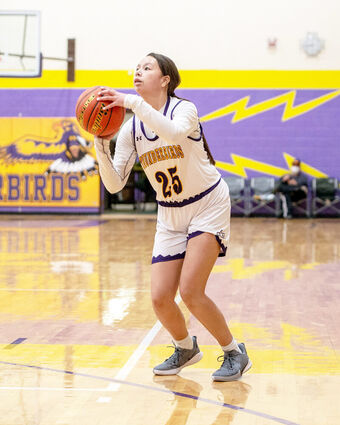 Senior Jaedyn Chandler knocks down one of her four three-point buckets during the Thunderbirds 52-32 win over Fort Benton.

The Hays/Lodge Pole Thunderbirds have found their rhythm and it's starting to show up in the win column. The girls had some tough losses early on against District 9C foes, but as the season has progressed they are certainly finding their stride.

Following an untimely week off due to Covid-19 restrictions the Thunderbirds were back on the court this past Friday as they welcomed the Fort Benton Longhorns to town in a huge District 9C contest.

In the first meeting between the two teams the Longhorns jumped out to a big lead by intermission and despite a valiant second half effort the Thunderbi...