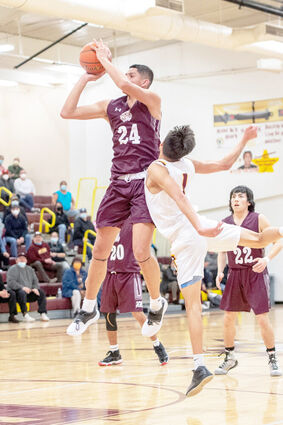 Harlem junior Caleb Cole made his first appearance of the season Friday night in Rocky Boy against the Stars. Cole scored 11 points in two games over the weekend.

The Harlem Wildcats were back in action this past Friday as they played a couple of District 1B foes. Friday the Wildcats were in Rocky Boy where they fell to the Stars in a hard fought 74-62 contest. Saturday they were back home playing in front of the home town crowd and turned in a comfortable 77-51 win over the Cut Bank Wolves.

In the Wildcats first meeting with the Stars, they weren't as competitive as they had hoped to be, they were also shorthanded. Friday they were back at full strength as they headed to Rocky Boy, but the team had to knock off some rust having been sidelined for a...