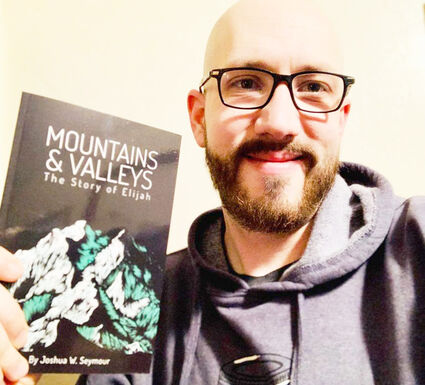 Former Lead Pastor at Chinook Assembly and currently the Lead Pastor at Central Assembly of God Church in Great Falls, Joshua Seymour is proud to announce the release and availability of his book. Although Mountains and Valleys: The Story of Elijah releases officially on Friday, March 18, on all book platforms in both paperback and Ebook, Amazon is currently conducting a presale.

For anyone who wishes to preorder, Seymour encourages immediate action. Through Amazon's algorithm, preordering helps to generate interest in the book. That interest triggers Amazon to boost advertising, which further increases sales.

Seymour himself has 250 advance copies that he will sign and have available for sale. Anyone interested can reach out to him and personally connect or leave a message on Facebook. Copies can be mailed via the USA for a small additional fee. Given his new pastoral assignment, Seymour, his wife Kristi, and their son Enom will be moving from Chinook in the near future.

Self-published with BookBaby Publishing, Mountains and Valleys recounts the story of the biblical prophet Elijah who found himself on mountaintops and in valleys throughout his lifetime. As Seymour reveals how Elijah navigated each moment, the story becomes an allegory for how we might live our own lives. Just as God taught Elijah to leverage the highs and lows of his life so as to glorify Him, we can learn to leverage such moments in our own lives.

"Mountains and valleys are normal. How we navigate those highs and lows in our lives really matters," Seymour claims. "And the Bible teaches us how to do that."

Seymour describes the inspiration to write his book: "The Lord asked me to write a book with the devotion He had given me to share with a group of pastors back in September. The book chronicles the story of the prophet Elijah recorded in the Bible in 1 and 2 Kings."

Seymour completed the rough draft of the manuscript and sent it to the copy editor on October 26, 2021. While waiting to receive any recommendations for revision, Seymour held a Book Cover Design Contest. Six people submitted ideas which were reviewed and received votes. Announced on November 1, Jen Sheldon from Glenwood, Minnesota, was declared the winner. A design by Chad Peterson, a pastor in Big Fork, was selected as the runner-up.

On December 27, Pastor Josh updated his final manuscript, and as they say: the rest is history. Seymour reported that Mountains and Valleys is the first of a series. He plans to write additional books that expound on the stories found in the Bible. The journey taken by Moses and that by David are next on his list.