State Speech and Drama Winners Are in the Books 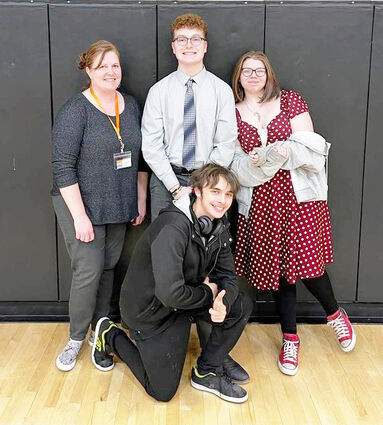 Liam Edwards, a senior at Chinook High School, and his mother Tammy Edwards tried something new this year. He switched from drama to speech competition and she was a first-time Speech and Drama Coach. At the State B/C Speech and Drama Tournament held in Worden, Montana, at Huntley Project School on January 28-29, Edwards made it to the final round of competition and finished seventh in the state. He was bested by his former classmate and the grandson of Perry and Pauly Miller, Zachary Miller of Culbertson. Miller took first place in Memorized Public Address.

Other Chinook competitors were Listat Pope, who made it to semifinals and finished just out of the medal round in 9th place, and Lilly Munari, who competed but didn't make it to the finals round. Julia Briere, who also qualified for state, was unable to travel for the competition.

At such tournaments, the top fourteen finishers advance to semifinals after four preliminary rounds of competition. The top eight compete in a final round.

Edwards, who has become interested in history and politics during the last couple of years, performed George W. Bush's address to the Nation on September 11, 2001. Given that this will be the 20th anniversary of the 9/11 attacks made the topic relevant and timely, so Edwards considered it a good topic.

According to Edwards, a powerful part of Bush's speech is the reminder that America was founded on ideals of democracy and liberty and that adversaries cannot destroy an ideal. Two sentences in the speech especially help to shape that message: "Terrorist attacks can shake the foundations of our biggest buildings, but they cannot touch the foundation of America. These acts shatter steel, but they cannot dent the steel of American resolve."

"If we as Americans stand unified against adversity, in my opinion, we will forever be a nation greater than any other in the world," Edwards said.

In his previous three years of Speech and Drama competition, Edwards had twice performed in drama with a partner. Explaining his cross-over decision, Edwards-who currently serves as Student Body President at Chinook High School (CHS)-claims that he decided to sharpen his speech skills and to challenge himself in a new way.

"I decided to switch to speech because I felt like I needed a change. I also enjoy the significance that comes from speech. With drama, I would be doing some funny pieces, but they failed to really have meaning. With speech, there were competitors who spoke passionately about a multitude of subjects, and I was happy to speak my beliefs as well."

When he graduates from CHS in May, Edwards plans to attend the University of Montana in Missoula, where he was accepted into Davidson Honors College. With his end game being law school, he is considering an undergraduate degree in either psychology, business, accounting, or education. According to this mother, he hasn't narrowed down his exact degree yet. "Liam hopes to find some clarity when he gets to campus and can explore all the options."

While in Worden, Edwards competed against Zachary Miller, who is the son of Tony Miller. The pair attended first grade together at Meadowlark Elementary School with Mrs. Edwards as their teacher. Currently, Miller is a senior at Culbertson High School.

"I honestly didn't know Zach very well," Edwards stated. "But [such encounters] do remind a person how small the world is. I actually met a few people from Boys' State, the Western Aerospace Scholars program, and Fort Peck Summer Theatre Camp at state, and it was very exciting to see them again."

To achieve his superior placing in MPA, Miller delivered a speech by Navy SEAL, Admiral William H. McRaven: "If You Want to Change the World, Make Your Bed." At the University of Texas (UT) commencement exercises in 2014, UT alumnus McRaven referred to his Navy SEAL experiences, telling graduates, "If you want to change the world, start each day with a task completed . . . . [In the process], find people to help you, respect everyone, know life is not fair, know you will fail often, take risks, step up when times are the toughest, face down the sharks, give others hope, and never 'ring the bell'!"

For readers who might be unfamiliar with the military idiom, ringing the bell means a candidate has essentially reached a personal limitation and is signaling that he/she has given up. Because SEALs aren't a group of solo artists doing Lone Ranger acts, SEAL training is intended to test mental and physical limits. Fewer than 20 percent of candidates complete this rigorous training that emphasizes the importance of teamwork. When exhausted after reaching a breaking point, SEAL candidates drag themselves to the Bell and ring it three times. The sound echoes through the training grounds, announcing another candidate has "volunteered out."

Since team members count on each other, if one link of the chain breaks, the consequences can be tragic.

Upon graduation, Miller hopes to pursue a post-secondary career in the military. "I plan on pursuing a career in nuclear propulsion in the US Navy and then going to college for history and architecture," Miller stated.

About his win at State, Miller said, "It felt incredible and relieving. I definitely felt proud about it."

About her team, Mrs. Edwards said: "I'm a very proud mom, coach, and bus driver! I'm sad Liam's senior season is over, but he showed great leadership on the team and did a fantastic job. Due to illness in my fourth team member, I ended up taking only three to state. I'm so proud of them all! Go, Beeters! We are hoping to have an open house in February, but I don't have that worked out, yet."