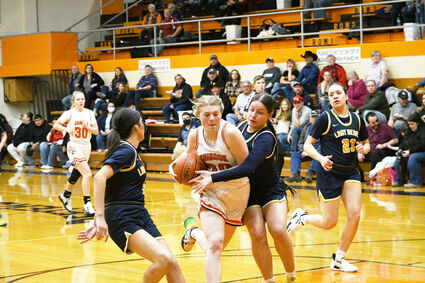 Sophomore Hallie Neibauer draws the foul going to the basket during second half action with the Bears.

The Chinook Sugarbeeters saw their win streak come to an end Thursday night at home against the top seeded Box Elder Bears. The 'Beeters held an early lead against the Bears, but over the course of 32 minutes Box Elder took control in claiming a 64-45 win. The 'Beeters responded the next time taking the court with a 56-36 win on the road Saturday night against the Turner Tornadoes.

The Chinook Sugarbeeters are looking to get over the proverbial hump in their quest to reach the top of the District 9C ladder. Chinook has made great strides in recent years and have nearly ascended to the top of the mountain.

Chinook entered their contest with the Bears with just one blemish on their record, an early season loss in Box Elder. The 'Beeters have grown tremendously this season and have began to cruise past once mighty opponents, but Box Elder still has their number.

Freshman Alexus Seymour connected from distance and scored seven points early. Sophomore Hallie Neibauer added four of her own to help Chinook secure a 13-8 lead after one quarter of action.

Box Elder then turned up the pressure and began to disrupt the 'Beeter game plan on both ends of the court. Seymour scored four more before the break and freshman Hannah Schoen got in the mix with a couple of buckets. Box Elder however was running and gunning as they scored 22 before the break to take a 30-25 halftime lead.

Neibauer kept the 'Beeters in striking distance after the break, scoring eight points in the third quarter. That effort wasn't enough to close the gap though as Box Elder extended their lead to seven, 44-37 heading into the fourth quarter.

Coming down the stretch the 'Beeter attack consisted of six more points from Neibauer and eight points as a team. The Bears scored 20 the final eight minutes to secure a 64-45 win and sweep the regular season series with the 'Beeters. 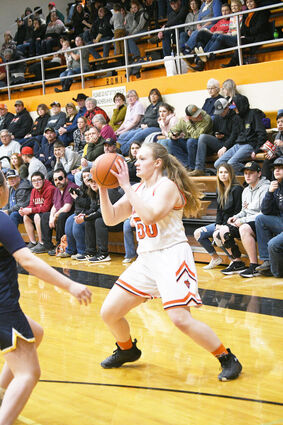 Chinook was led on the night by Neibauer with 19 points. Seymour contributed 12 for the 'Beeters in the loss.

Saturday night in Turner the 'Beeters were looking to get back to their winning ways. Neibauer scored 13 first half points and the Sugarbeeters got points from eight different players as they opened up a 33-16 halftime lead.

Neibauer added 11 more after the break, scoring a game high 24 points in a 56-36 win over the Tornadoes. Sophomore Britton Elliot finished with eight. With the win Chinook improves to 8-2 in conference and 10-3 overall. Junior Dakota Krass led Turner with 11 points on the night.

Chinook will close out the regular season this Friday in Gildford with a game against the North Star Knights. Saturday they will recognize their seniors in the teams final home contest against the Fort Benton Longhorns.