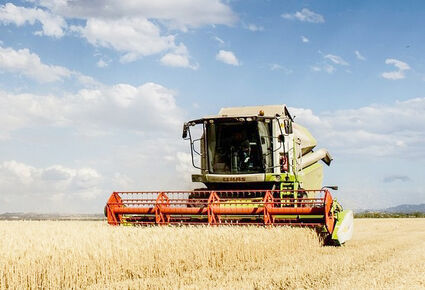 When the curtain rises on The Harvest this weekend, the show will not only feature local talent in the cast, crew, and director but with the script's author. Opening night is Friday, March 4 at 8:00 p.m. in the Montana Actors' Theater (MAT) on the campus of Montana State University-Northern.

Written by MAT's Executive Director, Jay Pyette, the script explores the struggles of a farming family in North Central Montana. Because the patriarch of the family is in poor health, the children return home to help bring in the crop. In the process, they are forced to confront the changes in their relationships and some conflicts from the past.

"The inspiration for this story really came simply from living in this area," Pyette explained. He admits that the story contains certain elements of his own family life, but it also reflects the lives of so many others who call the Hi-Line their home.

Troy Powell, who will portray the character Samuel Carthege, agrees:

"The Harvest truly depicts the reality of not just Montana families but families everywhere."

According to Director Audrey Barger, "This is not just a one issue play. It might be about a farm family, but the issues they deal with are the issues that many of us face. With its broad appeal and relatability, this is a show that will impact any audience."

Believing that that relatability is connected to emotion, TJ Schwartzkopf, the actor who will play Michael Carthege, said: "You will face and overcome many emotions along with the Carthege family. Fear, anger, sadness and uncertainty will make you feel like you are a part of their world."

Likewise, Tylyn Turner, performing as Sarah Pinnelly, considers the play to be "a moving and elementally relatable story about a family trying to find their way when connection is lost and hardship closes in."

Tickets for the show are available at Havre Area Chamber of Commerce, & Company Apparel, The Computer Center, and Bear Paw Meats. They can also be purchased online at mtactors.com.