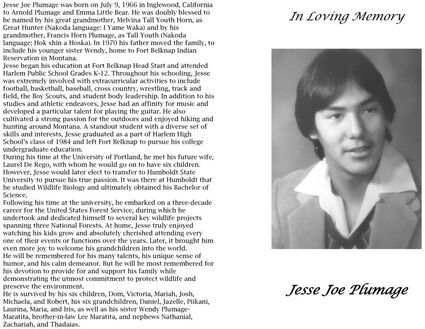 Jesse Joe Plumage was born on July 9, 1966 in Inglewood, California to Arnold Plumage and Emma Little Bear. He was doubly blessed to be named by his great grandmother, Melvina Tall Youth Horn, as Great Hunter (Nakoda language: I Yame Waka) and by his grandmother, Francis Horn Plumage, as Tall Youth (Nakoda language: Hok shin a Hoska). In 1970 his father moved the family, to include his younger sister Wendy, home to Fort Belknap Indian Reservation in Montana.

Jesse began his education at Fort Belknap Head Start and attended Harlem Public School Grades K-12. Throughout his schooling, Jesse was extremely involved with extracurricular activities to include football, basketball, baseball, cross country, wrestling, track and field, the Boy Scouts, and student body leadership. In addition to his studies and athletic endeavors, Jesse had an affinity for music and developed a particular talent for playing the guitar. He also cultivated a strong passion for the outdoors and enjoyed hiking and hunting around Montana. A standout student with a diverse set of skills and interests, Jesse graduated as a part of Harlem High School's class of 1984 and left Fort Belknap to pursue his college undergraduate education.

During his time at the University of Portland, he met his future wife, Laurel De Rego, with whom he would go on to have six children. However, Jesse would later elect to transfer to Humboldt State University to pursue his true passion. It was there at Humboldt that he studied Wildlife Biology and ultimately obtained his Bachelor of Science.

Following his time at the university, he embarked on a three-decade career for the United States Forest Service, during which he undertook and dedicated himself to several key wildlife projects spanning three National Forests. At home, Jesse truly enjoyed watching his kids grow and absolutely cherished attending every one of their events or functions over the years. Later, it brought him even more joy to welcome his grandchildren into the world. He will be remembered for his many talents, his unique sense of humor, and his calm demeanor. But he will be most remembered for his devotion to provide for and support his family while demonstrating the utmost commitment to protect wildlife and preserve the environment.