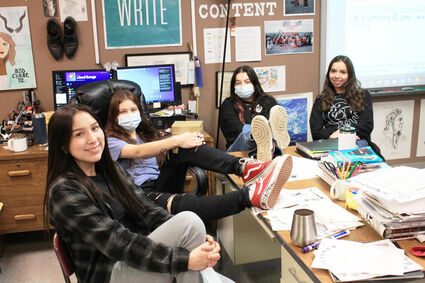 Juniors Jessica King, Mylah Rider, Nellie King, and Ma'Lea Moore have gained notoriety at Harlem High School as the OGs. They are the 'originals' who found satisfaction in the poetry unit taught during Matthew Hodgson's Sophomore English course and who continued writing and pursuing poetry on their personal time. In January of 2022, the quartet formed a movement, the I'Abi Waštena Poetry Movement.

I'Abi Waštena is a Nakoda phrase which translates in English to mean "pretty with words." As leaders of a new generation of poetry and as mentors guiding younger poets in development of their artistic creations, the four young women plan to collaborate in creating an anthology. This anthology proposes to include poetry, essays on views of poetry, and collaborative projects with other Native American authors, as well as other art forms. For inspiration, the poets-hoping to become a second generation renaissance-name key influences from the first generation of Native American Renaissance writers: N. Scott Momaday, Joy Harjo, Heather Cahoon, James Welch, and M.L. Smoker.

Hodgson described the I'Abi Waštena group as four young women who explore their cultural backgrounds and identify with being Native American. "They are making a statement about artistic creativity and what it means to inhabit a tribal landscape while exploring regional ties and the spirituality in this space. Their writing is critical for identity development and a testament to how education can go beyond the classroom. In this artistic experiment in collaboration, they are growing as poets with each other."

Although the group hopes to work together to create this anthology, they continue to be prolific individually. While two have published with PBE Press, a private publisher managed by Hodgson, Nellie King will be the first of the four to have her book, self-divine, available with Barnes & Noble, and Rider is on the brink of publishing her second book.

King's debut poetry collection is described on the Barnes & Noble website: "Inspired by song lyrics, the emotions hidden in words, and her Native American cultural heritage, Wówapi Wasté Winyan, or Nellie Rose King, offers self-divine, a collection of poems in English and Nakoda that investigate the feeling of the word 'divinity.' In this collection, poetry becomes a vehicle for realizing the importance of the poet's language and heritage, while simultaneously engaging perspectives that exist between the traditions of poetry and Native American culture."

Drawing inspiration from Heather Cahoon's collected poems in Horsefly Dress, King describes her poetry as not only making a statement about heritage but viewing culture through nature. "Nature is an important element in this collection. I see the earth as divine and language as a way to give praise."

Hodgson added, "Many of the poems are reminiscent of Sylvia Plath's style. Nellie is harnessing emotion in a mature and productive way."

Another member of the group, Rider describes her second book, beautiful witness, as an experiment with new forms. "I'm excited and proud for this book because I know I've grown as a writer. I write differently now, with richer word choice, longer poems, differing formats, and more rhyming," she stated. She spoke at length about a Richard Hugo poem "Galileo's Chair" which she used for inspiration when she experienced writer's block. In this prose poem that uses the Italian phrase eppur si muove (and yet it does move), Rider not only found inspiration to use her own Nakoda language but the permission to be experimental, exchanging the bounds of form and tradition for what she refers to as "a more flowing format."

With this book, Rider claims to inspire feeling and to portray emotion in hopes that others can relate. "Writing is a therapy to me. It's a place I can go to talk when I don't feel like talking." As her writing goals, she named a hope to keep coming out with new books and to grow an audience base.

Her collection, beautiful witness is divided into five parts: the beauty within, letters, mind chaos, winter, and home. Each of the section pages will feature art by Rider's aunt Feather Main. "I told her to just create what she feels after reading the poems in each section," Rider explained. "I'm eager to see what she comes up with." 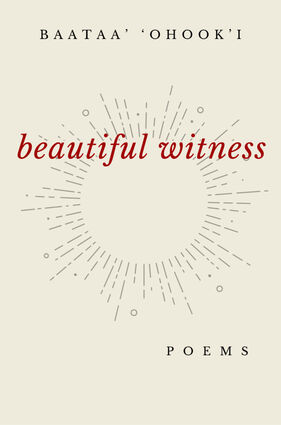 Rider's book cover also carries her Indian name: Baataá ′Ohook'i, a pair of Nakoda words which translate to Holy Tree. "That is the sacred center pole in our Sun Dance Lodge," Rider explained.

Besides the achievements of King and Rider, Hodgson also spoke about

Vanise Little and her progress towards the publication of a "square" hardcover collection. "It's reminiscent of a European chap book. It might be short, but it packs an emotional punch."