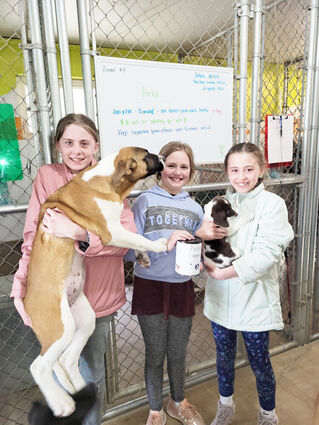 Isabella Van Voast, Piper Fox, and Hannah Van Voast interacted with the animals at the PAWS shelter on April 1 after delivering their donation of $400. Not Pictured: Savannah Heilig.

A trio of generous, service-minded animal lovers stopped by the PAWS pet shelter in Chinook on Friday, April 1, to deliver the $400 they raised through a pet sitting service. The fourth member of their group was unable to accompany them, but all four youth played a role in generating the funds.

The initial idea to raise funds for PAWS originated with Hannah and Isabella Van Voast. The sisters, who are the daughters of Shannon and Alan Van Voast, talked with their classmates Piper Fox-daughter of Brian and April Fox-and Savannah Heilig-daughter of Kent and Rachael Heilig-about ideas to fundr...