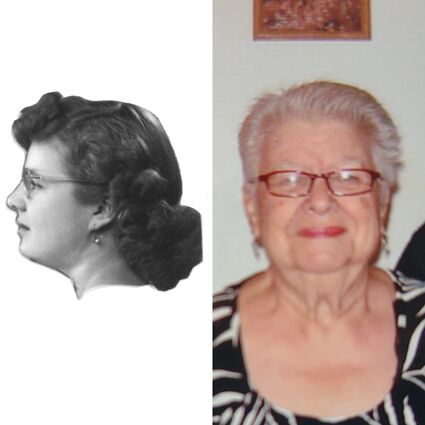 Sally Ann was born October 5, 1927 to Esther & James Spencer at the Agency hospital, Fort Belknap, Montana and passed away March 27, 2022, Great Falls, Montana. She grew up on the Spencer Ranch at the foothills of the Bears Paw Mountains, including the Spencer Cow Camp on Cow Creek. Sally attended school at Hays, Snake Butte, and Dodson. After graduating from Chinook High School in 1945, she attended MSU Bozeman for a year and decided to wait for her sister, Molly, to graduate high school so they could go to college together. During this wait, she trained with the Weather Bureau of Havre and was stationed at Grants Pass, Oregon. Sally then attended the College of Great Falls, graduating in 1952 with a degree in Biology.

Sally met the love of her life, Sam Pankratz, in Harlem, Montana. They married June 18, 1952 at the mission in Hays, Montana. They made the Spencer Ranch their home where they raised 5 children, Sally Jo, Matt, Tim, Esther, and Samar. In 1978, they bought a house in Harlem so the kids could attend school.

Sally believed in helping others, so community and neighbors meant a lot to her. She volunteered for the March of Dimes, Harlem Rodeo Club, and Poppy Drive. Memberships included the VFW Auxiliary, St. Thomas Alter Society, and most recently, the Community Center. After tending bar in Harlem, Zurich and Turner, at age 78, she decided to retire. She enjoyed bird watching, puzzles, reading, drawing, Jeopardy, Perry Mason, baking for others and prayer chain. Family gatherings and friends brought joy to heart.

A funeral mass will be held 11 a.m. on Tuesday, May 10, 2022 at St. Thomas Catholic Church, in Harlem, Montana. Interment will follow at the Harlem Cemetery with a reception at the family home afterwards.