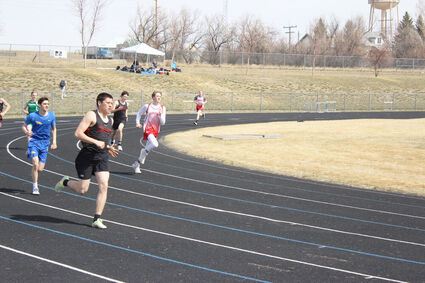 Chinook junior Braxton Inman runs the 400 Meter Dash. Inman has performed very well on the track this spring in the sprints.

All four Blaine County teams were able to compete on the Track and in the Field this past week. Turner and Hays/Lodge Pole were in Whitewater on Thursday. Saturday the Chinook Sugarbeeters joined the Harlem Wildcats in Choteau for the Acantha Invitational.

The Whitewater meet had a few more teams than normal with the Havre Blue Ponies joining the mix as teams looked to add meets to make up for cancellations.

The Tornadoes were paced on the day by a solid effort from sophomore Ryan Doyle who garnered a pair of third place finishes on the day. Doyle was third in the 400 Meter run as well as...