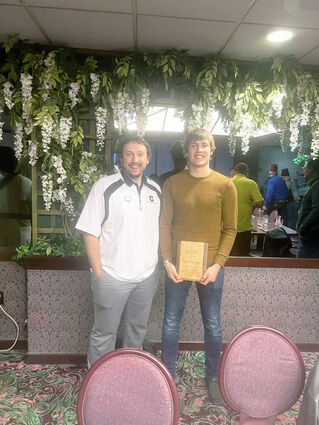 Chinook Head Football Coach Mike Jones and Chinook senior Toby Niederegger were on hand at the East/West Shrine Game Banquet in Havre last week. The banquet is held to recognize the coaches and athletes of the Hi-line that have been selected to be a part of the East/West Shrine Football game each year. This year is the 75th Shrine game and will be played in Great Falls this June.

The 75th playing of the Montana East-West Shrine Game will take place this June in Great Falls and will be played at Memorial Stadium. The game itself is one of the oldest of its kind in the country and to be selected in any capacity is a tremendous honor.

This past Wednesday Chinook Head Football Coach, Mike Jones, and senior standout, Toby Niederegger were recognized at a banquet held at the Duck Inn in Havre for their selection to the East/West Shrine game.

Jones was picked to be a part of the East coaching staff led by Head Coach Mark Sampson. Jones will be an Assistant Coach on the def...