'Beeters Capture Both Singles & Doubles Titles, will send 6 To Class B/C State Tennis 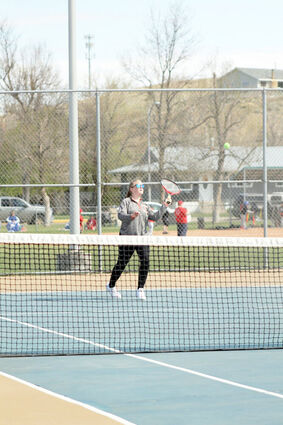 Sophomore Mya Berreth defeated teammate, senior Allison Powell in the Singles Tournament while the Doubles team of junior Lexi Pitkanen and junior Torin Cecrle took home the Doubles championship. The duo of freshman Rilee Molyneaux and Jeni Mord finished fourth in the doubles tournament for the 'Beeters. Both Doubles teams along with Berreth and Powell will now head to the Montana Class B/C State Girls Tennis Tournament in Bozeman later this week.

The North/East B/C Tennis Divisional field consisted of five teams this year. In addition to the Sugarbeeters and the Lady Cats, teams from Fort Benton, Chester/Joplin-Inverness and Fairfield took part. In all there were 17 entries into the Singles Tournament and six entries into the Doubles tournament. At the conclusion the top five singles players and the top five doubles teams advanced to the Montana Class B/C Girls Tennis State Tournament.

The Sugarbeeters entered the tournament with Berreth as the No. 1 Seed, Powell was listed as the No. 3 Seed. Richman entered the Singles tournament as the No. 7 Seed. This was Richman's first time seeing her name on the singles bracket as she had played Doubles her first three years of high school. Freshman Natasha Skoyen rounded out the 'Beeter's singles contingent, beginning play as the No. 12 Seed.

The Harlem Lady Cats had just one player out this spring, senior Alexus Cochran. Being the only member of the Lady Cat team hasn't deterred her from finding success on the court. Cochran entered the Singles tournament as the No. 9 Seed. Chinook had a pair of teams fielded in the Doubles Tournament. Cecrle and Pitkanen were listed as the No. 3 Seed on the bracket while the freshman tandem of Molyneaux and Mord began the tournament as the No. 4 Seed.

In the opening round the 'Beeters shined. Berreth got off to a great start with a lopsided win over Fort Benton's Taylor Ball 6-0, 6-0 to advance to the quarterfinal round. Powell followed suit with a convincing 6-0, 6-2 over Chester/J-I No. 14 Seed Hannah Neslor to move on. Richman also found success in the opening round for the Sugarbeeters, taking down the No. 10 seed from Fairfield Quin Christensen in a back and forth thriller 6-3, 5-7, 6-4.

Berreth continued to roll in her quarterfinal contest, defeating Harlem's Alexus Cochran 6-0, 6-3 to secure her spot in the semifinal round Saturday afternoon. Powell also advanced to the semifinal round taking down No. 6 Seed Lucia Miranda of Fairfield 6-2, 6-0. Richman wasn't as successful in round two, falling to the No. 2 Seed from Chester/J-I in another tightly contested match 6-3, 7-5.

Cochran got her tournament off to a great start picking up a win for the Lady Cats in the opening round over Fairfield No. 8 Seed Madelena Preston 6-4, 6-1. Chinook's Tasha Skoyen fell in first round action to the No. 5 Seed from Chester/J-I Sydney Hawks, 6-2, 7-5 sending her into Loser Out action. Cochran would fall in her quarterfinal match to Berreth setting up a match with Skoyen for the right to advance. Cochran defeated Skoyen, 6-2, 6-2 ending her tournament. Cochran would bow out in her next match, falling to Chester/J-I Sydney Hawks 6-4, 6-1

Richman faced Fairfield's Lina Vaughn in her first loser out match, defeating the No. 11 Seed 6-3, 6-0 to stay alive. She then survived another long battle against Fairfield's Lucia Miranda 4-6, 7-5, 6-1. In the Consolation semifinal Richman was defeated by Fort Benton's Hailey Wang 6-1, 6-2. With a trip to the State Tournament on the line Richman fell short, dropping her final match to Hawks from Chester/J-I.

In the semifinal round Berreth dispatched Fort Benton's Hailey Wang 6-0, 6-6 (7-4) to advance to the championship match. Her opponent would be none other than own teammate. Powell took down the No. 2 Seed from Chester/J-I, Aaliyah Staniford 6-0, 6-4 to punch her ticket to the finale. In the all 'Beeter Championship match it was Berreth claiming victory, 6-3, 6-4 over Powell. Both will now turn their attention to the Montana Class B/C State Singles Tournament in Bozeman beginning today and running through Friday.

In their opening round match the duo took down the team of Liana Santos and Rainie Halko from Fort Benton in straight sets 6-3, 7-6 to advance to the semifinal round. Pitkanen and Cecrle then took the court opposite Marissa Wipf and Maya Wilson of Fairfield and again earned a straight set win, 6-3, 6-2 to secure their spot in the championship match. In the finale the opposition was the team of Samantha Vielluex and Ashlee Wang from Fort Benton the tournaments No.1 Seed at the start. Pitkanen and Cecrle earned a hard fought 6-3, 6-6 (7-4) win to claim the title.

The 'Beeters freshman doubles team of Rilee Molyneaux and Jeni Mord continued to shine in their first year of high school tennis. The duo began with a three set win over the No. 5 seeded team from Fairfield, Darrah Rogers and Shea Ostberg, winning the match 6-2, 4-6, 6-3. Molyneaux/Mord fell in the semifinal to the Wang/Vielluex team from Fort Benton 6-3, 6-3 and found themselves in the losers bracket.

Molyneaux/Mord bounce right back, winning their next match 6-3, 4-6, 6-2 over the Santos/Halko team from Fort Benton. In the third place match the duo turned in a valiant effort against the Fairfield team of Wipf/Wilson to finish fourth.

Head Coach, Janelle Deanon couldn't have been more proud of her team, "The girls showed that they were there to compete and truly gave it everything that they had. I'm so proud of the way they all played and even though we didn't quite get everyone qualified for state they all played with so much heart!" The Singles bracket was a shining moment for the team, "It was extremely rewarding to see the singles championship match come down to Allison and Mya. Allison was the singles champ last year and Mya was just shy of qualifying for state but I knew that no matter how it worked out in the end this year, it was going to be a great match and a showcase of just how hard they worked." 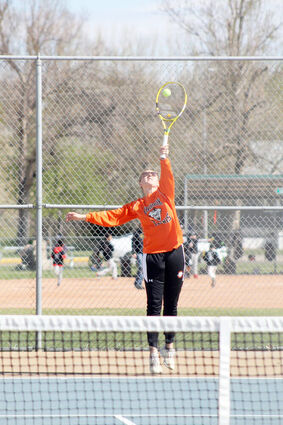 The doubles bracket was another fine showing for Beeter Tennis, "Lexi and Torin taking the doubles championship was also amazing, they beat two teams that accounted for their only losses this season so that was a true triumph. I was excited for our freshman doubles team Rilee and Jeni to show just how much they learned in their first year as well. With a fourth place finish again over teams that they had previously lost to in the season was better than I could have hoped for."

While not everyone will move on, Deanon was proud of their effort, "Even though she didn't qualify for state, Tasha had a wonderful tournament, she played some extremely tough competitors and never gave up making her opponents work until the very last point. Our final senior Tylie defiantly poured out everything she had on the court, she fought so hard and showed that even though it was her first year playing singles she meant business."