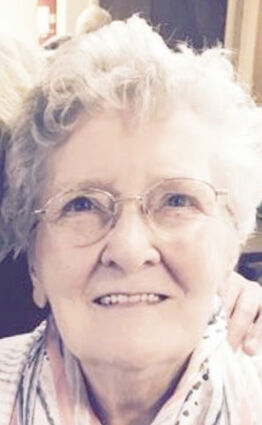 Artista Larson passed away on Friday, October 15, 2021 due to her long fight against Alzheimer's in Missoula, MT. Though much sadness is felt by all of those who knew and loved her, we now rejoice because mom is in heaven, with her Lord and Savior Jesus Christ, for eternity. This isn't goodbye, but it's until we meet again.

Artista Mae Kottke was born in Ossian, IN, on July 7, 1932 to Edwin A. Kottke and Carrie Hamilton Kottke. She had a brother, Warren Hamilton Kottke, who was 9 years older than her, but they were lifelong friends. As the family moved out west, they planted their roots in Chinook, MT. Artista was 4 years old and she truly enjoyed her simple life living on a small farm on the north side of town, where she had a very special dog named Shep. She graduated from Chinook High School in 1950, where she was on the National Honors Society, played baritone in the high school band, was a member of the dance band group "The Lemonaires", played the piano for the Lutheran Church along with enjoying playing basketball and was an incredible bowler with many trophies proving her abilities.

After high school, Artista moved to Helena, MT, for 1 year, and was a stenographer at Fort Harrison. Being a small town girl at heart, she returned to Chinook and worked as a teller at the First State Bank for 4 years. During this time, she met her future husband, Ernest Larson, who had moved into town from Oklee, MN, and was dared by his younger brother Bennet Larson Jr. to ask Artista out. Long story short, she said yes, they dated for 1 year and were married on September 20, 1953. In their almost 65 years of marriage, the Larsons were blessed with 4 children: Larry, Amy, Julie, and Connie. And, had 6 grandchildren: Rachael Larson, Lauren and Jan Wootten, Aubrey St. Clair, and Abigail and Aaron Duczek, along with 2 great grandkids Jeremy and Hannah.

Busy raising 4 kids along with taking care of the home, things were about to change for the Larson's. In 1971, Artista and Ernie, her husband, decided to purchase the Gambles Hardware and Appliance store and they eventually sold that business in 1985. During this time of ownership, the Larson's opened up Larson's Furniture in 1973, until they liquidated the inventory and sold the building in 2002. Artista was the co-owner of both businesses along with being the full-time bookkeeper. She was an extremely hardworking woman, loyal wife, a true friend to so many, and a dedicated loving mom to her 4 children, attending every event that her kids were involved in. Mom, also, enjoyed playing the piano, from the classic Hymns to boogie woogie. She always had 2-3 afghan blankets going at all times, either crochet or knitting, and she blessed many adults and babies with her beautiful work. Artista loved her dogs (Tuffy, George, Rambo, and Sugar) along with many cats and babies. And, anyone, who knew her, knew she hated to cook, even though she was great at it, but she truly made the best chocolate chip cookies.

Artista's last 4 ½ years of life were spent at the Sweet Memorial Nursing Home in Chinook, MT, after having hip replacement surgery; she lived there for 2 years. After her husband, Ernest, passed away, Artista's youngest daughter, Connie, moved her to Missoula, MT, where she lived at the Edgewood Vista Memory Care Home, for 2 ½ years. She loved having Connie and her family close by so they could visit often and bring her any kind of chocolate along with chocolate milkshakes; obviously, she loved chocolate.

Artista Mae Kottke Larson is preceded in death by her parents, her brother, her husband, and her grandson Jan Michael Wootten. She is survived by her 4 children, 5 grandchildren, 2 great grandkids, along with many family members and friends.

A graveside memorial service will be held at the Kuper Memorial Cemetery in Chinook, MT, on Monday June 6, 2022 at 11 AM; a luncheon will follow the service at the American Lutheran Church.