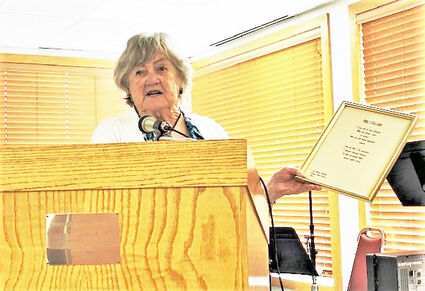 Lois Butcher is shown welcoming presenter poets and spectators to the first ever poetry jam held at the Chinook Senior Center last week. About 25 people attended the inaugural event to enjoy poetry ranging from original pieces to classics. Lois, who organized the event, is holding a copy of one of her original poems she wrote while in high school.

On May 11, the Chinook Senior Center played host to a Poetry Jam. The event, which began at 1:00 p.m., was organized by Lois Butcher and featured ten presenters.

Butcher said she worried at first that the event wasn't going to draw a crowd, but by 1:30 all of her presenters were on deck and a small audience had gathered. "The meet and greet went well and we had plenty of food. I was so thrilled with the turn out," she said.

Each participant was invited to read or perform an original and a classic poem. Three husband and wife teams, a couple of mother/daughter pairs, and even an aunt and a niece were among the performers. Presenters recited their poems in turn, making the event a family affair that carried a theme of connections, according to Butcher.

Mary Pyette is shown in a purple outfit with a red hat as she prepares to read "Warning," a poem about "When I get old...with a red hat." The red hat in the poem was the inspiration for the creation of the Red Hat Society. The Society is an international social organization for women, regardless of age, founded in 1998.

The event's featured speakers were Butcher's relatives, Kasie and Richard Bailey. "My niece performed a piece she had written and named 'Prairie Learnings.' It was about an old shack out south that is beginning to fall down. Her classic piece was a poem by one of my favorite authors, Ralph Waldo Emerson. Richard's classic was 'A Red, Red Rose' by Robert Burns."

Butcher can trace her passion for literature and poetry back to her childhood when she played the game Authors, a card game dating back to 1861. The Authors deck contains 52 cards featuring color portraits of 13 honored writers with lists of their four greatest literary works. Still played today as it was originally, the object is to collect complete books by calling for cards from other players.

Further inspired after hearing about and attending Poetry Slams and other coffee shop-style Open Mic events, Butcher wanted to share this entertainment form with Chinook residents. "I also wanted this event to be a tribute to Mary Pyette, who invited reputable speakers and ran a Cancer Support group here for years."

In future programming, Pyette and Butcher will collaborate to bring the culture of Greece to the Senior Center. Depending on what the pair decides, June 9 will feature information related to Greece-maybe even some cultural cuisine.