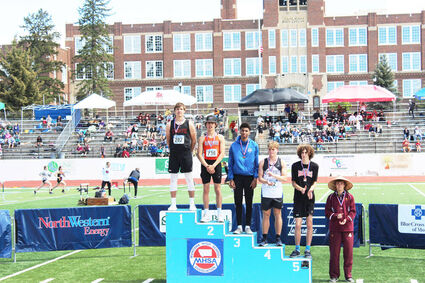 The 2021-22 Montana High School Sports year concluded this past Friday and Saturday in Great Falls at the Montana Class B/C Combined State Track & Field Meet. 14 Blaine County athletes, nine from Chinook, four from Harlem and one from Turner competed in individual events. The 'Beeters also qualified the boys 4x400 and 4x100 Meter relays as well as the girls 4x400.

Chinook senior Toby Niederegger jumped his way to the Class C Boys State High Jump title, clearing 6'4" to win the event. At the conclusion of the day Saturday a number of local athletes had secured a spot on the podium. Chinook's 4x100 Meter Relay turned in a stellar performance in the finals on Saturday to finish second in the race. Junior Anna Terry ran her way to a podium finish in the 3,200 Meter Run, finishing fourth in the event.

Junior Levi Jensen added to the 'Beeter haul with a fifth place finish in the High Jump. Lady Cat Chloe Messerly finished her senior season with a podium in the Javelin, finishing sixth. Sugarbeeter sophomore Hallie Neibauer ran her way to a sixth place finish in the 800 Meter Run completing the podiums earned by our outstanding Blaine County athletes.

All around it was a fantastic weekend on the track and in the field for our local athletes. Competing the final weekend of any season in high school is quite an accomplishment. To do so means you have qualified to compete on the biggest stage of the year with the states top performers.

Niederegger capped off an outstanding season in winning the Class C Boys High Jump. Niederegger had cleared 6'3" in his best effort as a junior and wasted little time in eclipsing that mark. At the Havre Lions Invitational Niederegger cleared 6'4" to establish a personal best as well as punch his ticket to the State C. In the meets following, he performed very well, clearing 6'2" three times ad 6'0" once to win each meet. At the Class C State Meet Friday Niederegger had to be at his best and he was. With the bar moved to 6'4" Niederegger was the first of three to successfully clear the height to capture the State C title.

The 'Beeter boys 4x100 Meter Relay team had high expectations entering the season and utilized a number of different line ups through the season. The quartet included Niederegger, senior Hunter Molyneaux, junior Braxton Inman and junior Tyler Schoen. The team entered the State C coming off a fourth place finish at the Northern C with a time of :45.32.

In the prelims the 'Beeters turned in a solid effort, crossing the finish line in a season best time of :45.30 to secure their spot in the 4x100 Meter Relay finals Saturday morning as the No. 8 Seed. The short relay is fast and furious and the boys would need to trim some significant time if they hoped to medal. They did just that, with crisp clean hand-offs and a great start the 'Beeters finished in :44.87 to move all the way up to second.

"On Friday the mindset was to make it to the second day no matter what. At the end of the day we all were worried thinking we weren't going to make it, we then found out we made it by .03 in eighth place," said Schoen. "The next day (Saturday) we needed to just set a new personal record by half a second to place. At the end of the race none of us could believe we took second. It was one of the greatest experiences in my life."

Terry has ran very well for the 'Beeters all season in both the 1,600 Meter and 3,200 Meter races while overcoming some obstacles along the way. Terry cruised in her 3,200 Meter Run Saturday at the State C, finishing fourth in the event, shattering her personal best mark in the process with a time of 12:31.32. Terry finished eighth in the 1,600 Meter run improving her time by more than nine full seconds, clocking in at 5:45.40.

Terry battled all season long to find her rhythm on the track, "After missing the first couple weeks of practice for the DC trip, I was off to a rough start. I was running times that were considerably slower than last year and it was hard not to become discouraged." Terry then turned to her coaches and support group for some good advise, "I decided that it was time to get in gear and work for the podium. When State rolled around, my coaches told me to just run the best I could and have fun, and that's exactly what I did. I finished the mile with a new PR, and I ended the 2 mile with a season personal best, a fourth place medal, and a drive to get better for next season."

Chinook junior Levi Jensen came on midway through the season in the High Jump and was consistent each time out. Jensen cleared 5'10" three times heading into the Northern C where he finished fifth with a height of 5'8". At the State C, Jensen put it all together with a 6'0" effort to medal at the State C with a fifth place finish.

'Beeter sophomore Hallie Neibauer has been very consistent all season long while running the 800 Meters. Neibauer finished her first race at the Cal Wearley in 2:31.03 added a couple more 2:31 efforts and finished the Northern C in second with a 2:31.12. At the State C Saturday Neibauer turned in her best effort to day completing the two lap race in 2:29.01 to medal and finish sixth at the State C.

Lady Cat senior Chloe Messerly had her sights set on a solid finish to her high school career and accomplished just the with a podium finish at the Class B State Track and Field Meet. Messerly medaled in the girls Javelin finishing sixth in the event. "Last year I didn't do very well at state and that motivated me to work hard and get better," said Messerly.

Coming into her senior season Messerly had some pretty lofty goals, "I knew the school record was possible if I worked really hard. I listened to my coaches all season and just kept trying to get better." Heading into the Northern B Divisional, Messerly had one thing on her mind, "At the Northern B I really was just trying to make it to state and when I heard the distance (115'3") I just got really excited, started jumping around and hugging my coaches. Setting the school record was a bonus."

At the State B Messerly pulled it all together, " My first two throws weren't very good and I was really nervous. I wanted to get to finals, it was pretty scary." When her third throw was measured at 115'0" it secured her spot in the finals and eventually a medal with a sixth place finish. "Walking off the podium with a medal at state in my final high school event, I felt accomplished. It felt really good and I'm excited to move on.

There were several outstanding efforts put forth by athletes that didn't find the podium as well, establishing new personal bests in the process at the State Meet. Freshman Alexus Seymour ran her best ever 800 Meter race at the State C, finishing seventh with a time of 2:30.46, more than two and a half second faster than her previous best.

Jensen took .68 seconds off his best mark in the 110 Meter Hurdled with a time of :17.19. Jensen qualified for the State C with a :17.87 and began the year with a :19.96 making his state time impressive. Turners Ryan Doyle finished tenth in th Class C Boys 800 Meter Race with an effort of 2:07.88, more than a full second faster than his previous best established the week before at the Northern C Divisional.

A lot of good things happened on the track and in the field for our local student athletes this spring. Some have graduated and will move on to bigger and better things. The returning athletes all have laid the foundation to have even more success next spring. Congratulations to all for another great season! 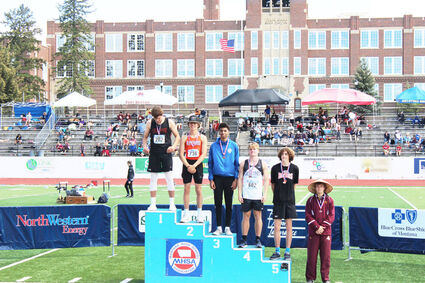