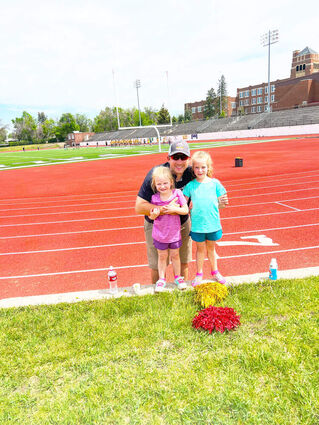 Chinook Sugarbeeter Head Football Coach Mike Jones spends some time with his daughters while coaching the East team at Memorial stadium in Great Falls this past week.

Chinook Head Football Coach Mike Jones has barely had any time to catch his breath following the conclusion of the 2021-22 school year.

Jones had the honor of being selected to be a coach for the Red Team at the Bob Cleverly Eight-man All-Star Game in Butte on Saturday, June 4. Jones was the offensive coordinator for the victorious Red Team and had the honor of coaching three graduated Sugarbeeters in the contest.