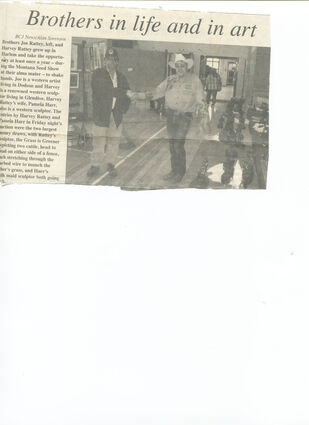 Joe Walter Rattey, 81, passed away June 1, 2022, at his home in Dodson, Montana. His memorial service will be held at a later date.

Joe was born in Chinook on December 20, 1940, to Lester & Rose Rattey. Je was raised in the Harlem area and was a graduate of Harlem High School, class of 1959. Joe was a very good athlete in High School and at one time held the record for the mile run. After graduation Joe joined the Army and was stationed in Germany for several years. After his honorable discharge he returned home to Montana and lived with his parents on their ranch south of Dodson, Montana. Joe helped his father with the ranch feeding cattle in the winter and putting up hay in the summers. He also worked for other ranchers in the area.

In the mid sixties Joe went to work at the Smelter in Helena, until 1979. He then returned to the Dodson area living back at the ranch. His parents had purchased a home in Dodson to be closer to things in town as they were getting older. His father passed in 1985 after celebrating his fifty-year wedding anniversary to his wife Rose.

Working on the ranch and doing his artwork consumed Joe's life. He was an accomplished Western Artist painting pictures just like CM Russell, an artist whom Joe idolized. Joe sold many paintings in the Harlem and Dodson area over the years. He displayed his artwork at the Harlem Seed Show along with his brother, renowned Western Sculptor Harvey Rattey.

After his mother was moved into the rest home in Helena in 1995, Joe moved to his parent's home in Dodson where he divided his time between his artwork and working on the ranch until his death.

Joe was preceded in death by his parents, Lester and Rose Rattey. Two sisters Janet Boe and Jean Tannihill and one brother Harvey Rattey. His nephew Jeff Boe Jr. in 1975.

He is survived by his sister Lois Nelson of Great Falls and twelve nephews and four nieces.