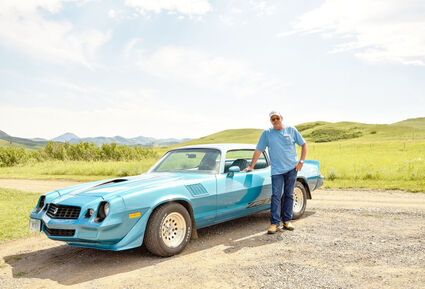 The 11th Annual Blaine County Cruise took place on July 8-9, and participants convey positive reports about the event. Fifty-nine individuals registered cars to participate, a number which event organizers described as "a great turnout." Winner of the High Point Prize was Kevin Springer from Kremlin.

The festivities revved up at 5:00 on Friday evening when cruisers began to trickle in at the Blaine County Fairgrounds to register for the Cruise with Josh Nordboe, Allen Pula, or Matt Langford. Each registrant received a bag of promotional items, a meal ticket, a t-shirt imprinted with the Cruise logo for 2022-sponsored by Jamieson Motors-and a challenge card for collecting points earned on the Cruise. After getting signed in, many joined in a Scavenger Hunt.

Scavenger hunters were asked to drive to a designated spot described by five given clues and to take a picture with themselves or their vehicles at each destination. For example, one clue read: "Jake is still wearing khakis"; another asked: "Do you have nuisance vegetation? These guys have the chemicals you need on Second Street." After collecting pictures from State Farm, Kamas Ag Sales, and other participating sponsors, this evidence was inspected by a judge at the check-in table prior to the showing of Friday night's scheduled drive-in movie, Hit & Run. Unfortunately, high winds and torrential rains descended on the Fairgrounds at approximately 8:00 p.m., causing a power outage and the movie's cancellation.

Although some area locations received nearly an inch of rainfall, that didn't dampen the car enthusiasts' intentions to "cruise on." A crowd gathered in the Commercial Building on Saturday morning for juice, coffee, breakfast burritos, donuts, and a fresh fruit compote prepared by the Blaine County 4-H Foundation. After satisfying their appetites and attending a "driver's meeting," vehicle operators lined up and departed from the fairgrounds at approximately 9:30 a.m., cruising past the Sweet Memorial Nursing Home, where residents assembled along the street to watch the parade of vintage vehicles pass.

One of the vehicles on the Blaine County Cruise was a shiny red 1933 Ford truck driven by Rayce Schultz from Canada. "My grandfather loved to restore vehicles, and when he passed, he left one to each of his four grandchildren," Schultz shared.

Another, a 1951 ¾ ton Chevrolet flatbed with a stock rack featured a gleaming evergreen and red paint job. Driven by Jess and Connie Murphy, the vehicle's license plate, G&DSTRK, complements the pictures of Jess' parents, Guy and Donna that ride in the cab. When they started farming in the area, Jess's parents bought the pickup new in Harlem at the Dolven Chevrolet dealership. They both went to school in Chinook.

Details like this suggest that every vehicle tells a story, given that memories are attached to them by their owners.

The convoy's first stop was Fresno Tavern where participants engaged with their initial challenge hosted by Christopher and Clarissa Skoyen. The object was to earn points by tossing piston rings at hooks fastened to a piece of plywood.

The next challenge took place in Big Sandy, where Travis Skoyen and Eryn Nissen held a timed, wrench-to-nut size matching activity. A pulled pork, cabbage slaw, and bean medley lunch was also served at Pep's Bar and the Mint Bar and Café.

From there, travel continued across Rocky Boy's Reservation and into Beaver Creek Park. Cruisers stopped at Bear Paw Lake for their third challenge, a dice game hosted by Loren Skoyen and Matt Langford. The pavilion at this location provided shade, as temperatures soared by afternoon, topping out at 89 degrees.

The final challenge, a windshield wiper "stop on the tape" contest was conceived by Denny Overcast and Allen Pula. This event took place in the Holiday Village Mall parking lot in Havre. When all cruisers had competed, score cards were collected and the convoy of mostly vintage vehicles returned to the Blaine County Fairgrounds for a dinner served by Val's Catering Service.

Following a meal featuring pork loin, prizes were bestowed. Winner of the Challenge Card competition was Kevin Springer from Kremlin. He captured the $1,000 High Point prize, and Dax Langford won the kids' event. A silent and a live auction-featuring auctioneer Kevin Elias-rounded out the festivities before the capstone showing of the 2012 film Hit & Run.

Written, directed, and edited by star, Dax Sheppard, the movie tells the story of a former getaway driver who risks his safety in the Witness Protection Program to drive his girlfriend to Los Angeles for a life-changing job interview. His former gang, whom he ratted out, and the Feds who protect him, get wind of his plan and give chase along the way. The film features a 1967 Lincoln Continental four-door hardtop.

Although another storm descended that evening, with some of the area receiving an additional sixth tenths of rainfall and causing power to flicker on and off a couple of times, the movie, which had to be shown inside, prevailed. During the showing, concessions were provided by the Chinook FFA. "Even though the weather messed up our movies, we need the rain, so everyone was all smiles," Langford stated.