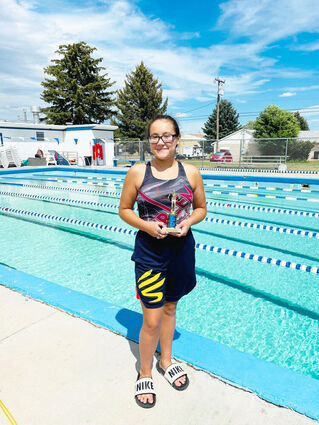 Harlem's Ciana Johnson won the 9-10 Girls High Point this weekend at the Malta Invitational. Johnson set two new pool records in the process in winning all three of her events.

After taking the fourth of July weekend off to celebrate Independence Day the Chinook Lions and Harlem swim teams were back in the pool this past weekend competing in the Malta Invitational. With the season winding down coaches and swimmers are really working hard to get ready for the post season.

As a team the Chinook Lions performed very well earning a third place finish at the Malta Invitational. Individually, the Lions were outstanding, with five swimmers collecting High Point honors in their respective age groups.

Full results for the Lions swim team were unavailable at press time but some individual accomplishments were available. Tyler Stephens established a new pool record in winning the eight and under boys 25 Meter Freestyle. Stephens won the race with a time of :16.96 eclipsing the previous mark set by Chinook's Daniel Tilleman back in 2017 of :17.91.

Bryce Elliot established a new Malta Pool Record in the 11-12 Junior boys 200 Meter Freestyle with a time of 2:36.84 breaking the old mark of 2:47.94 set back in 2017. The quartet of Rachel Stephens, Katie Tilleman, Brockton Elliot and Daniel Tilleman smashed the Federation record in the 13-14 200 Meter Mixed Medley relay with a time of 2:19.59 breaking the previous mark of 2:38.62 set a few weeks ago by the Sidney Tiger Sharks.

The Harlem swim team was well represented in Malta and had one swimmer take home top honors. Ciana Johnson set a couple of new pool records while claiming the 9-10 Midget girls division High Point trophy. Johnson smashed the pool record by more than a full second in winning the 50 Meter Freestyle with a time of :33.66. She would break her second pool record of the day with a win in the 100 Meter Freestyle toughing the wall in 1:14.60, taking more than three seconds off the previous mark of 1:18.00. Johnson capped her swim with a win in the 50 Meter Backstroke in a time of :42.92.

The Harlem Swim team had 21 swimmers in the pool this past weekend with some getting to swim for the very first time. All told it was a great week in the pool for the swimmers. 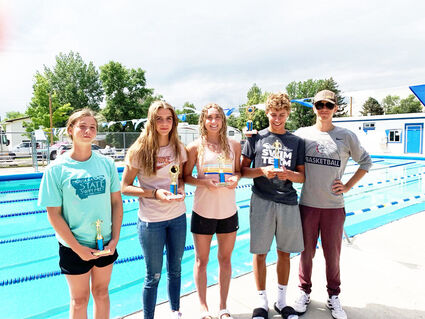 Overall it was an exceptional weekend in the pool for the Harlem swimmers with 17 of the 21 swimmers scoring points for the team while all 21 gained experience in the pool. The number of swimmers that competed in Malta is the largest contingent to represent Harlem this season and is a great sign for the future as Head coach Andrew Rasmussen looks to continue to grow the team. With such strong numbers emerging the future looks bright for the Harlem swimmers as the season winds down.

The Chinook Lions and Harlem Swim teams will be in Glasgow this weekend. The summer swim season is quickly winding down with just two regular season meets remaining. The teams will have the option of swimming in Fort Benton or Scobey the week of July 23-24. The Eastern Divisional will take place in Plentywood July 30-31 with the top 12 swimmers in each event advancing to the state Swim Meet in Lewistown August 6-7.