Gardeners Are Cautioned to Be on Lookout for Invasive Species 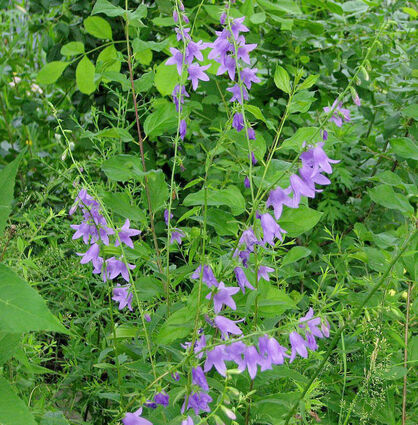 Creeping Bellflower (Campanula rapunculoides) is a perennial that was initially brought to the United States from Eurasia for its beauty. Unfortunately Creeping Bellflower, which is also known as Rampion Bellflower, has been identified as a non-native, invasive species in Montana.

Growing readily on roadsides, as well as in lawns, flower gardens, and valleys, the creeping bellflower also appeared in the County Listed Noxious Weeds directory during 2018-2019 in Flathead County.

A Montana Field Guide fact sheet, published by the state government (mt.gov), defines a non-native species as one that has been "deliberately or accidentally introduced to areas outside of their native geographic range and are able to reproduce and maintain sustainable populations in those areas. These non-native populations may also be referred to as alien, introduced, invasive, exotic, or non-indigenous."

According to one local gardener, this invasive weed resides in most yards in Chinook. Many of the creeping bellflowers grow to full bloom and seeding stage, which spreads the plant even more. It propagates both from seed-with up to 15,000 produced per plant-as well as via by way of its root system.

Difficult to eradicate once it is established, this plant can be identified by its several violet-blue drooping flowers that open along one side of its stem. The flowers are bell-shaped with five pointed lobes. Gardeners can practice control of Creeping Bellflower by digging up or pulling out the entire root system. Cutting the plant close to the ground repeatedly also helps to contain it. Although controlled burns will manage seedlings, the process will likely leave established plants virtually unscathed. If herbicide is used, it will require multiple applications.

Called "a nightmare of a plant," there is a Facebook page called "Creeping Bellflower Battles" dedicated entirely to getting rid of it. The private group not only shares links to articles about the control and elimination of creeping bellflower but also posts rants and personal pictures documenting eradication failures and successes. Although group members are cautioned to "please treat everyone with respect," as failure to do so will get the individual banned from the site, they are encouraged "to insult and disrespect creeping bellflowers as much as [they] like."

One individual wrote: "I admired this one for years, not knowing what it was. [Creeping Bellflower] is an awful bully, and I can't get rid of it. It's pretty, and the hummingbirds love it, so it's really too bad that it is such an awful plant!"

Another commented: "It's the bane of my existence. I can't get rid of it, no matter how much I pull it up. So frustrating! It is a mystery why this bellflower is needed in gardens when we have multiple native Campanulas of equal beauty here in North America. Also, a friendly reminder that just because a plant does not appear to be invasive in your area, doesn't mean it doesn't have potential to be a bully in others! Let's keep harmful invasive plants out of our gardens and restore our native habitats, rather than potentially harm them.

All of the resources describing control measures share essentially the same approaches:

• herbicides containing glyphosate (i.e. Roundup or Dicamba) are recommended, but none are 100% effective and will require repeat applications;

• burning may kill seedlings and repeated mowing may weaken the plants, but neither method will kill more mature plants;

• digging down at least six inches to get all the tubers, rhizomes, and roots may be the gardener's only hope; any missed roots will resprout;

• composting any plant material-especially if flowers or fruits are present-should be avoided in favor of burning or bagging for refuse; labelling the trash bag as an invasive species is also recommended.